Lecturer in Health and Exercise Science 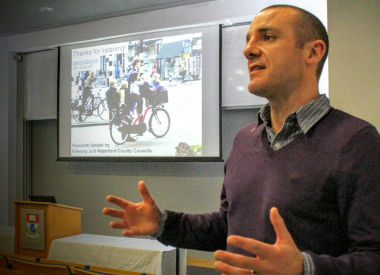 Barry Lambe is the Course Leader for the BA in Exercise and Health Studies. He has a BSc in Sport and Physical Education from the University of Wales Institute, Cardiff. He has an MSc in Exericise and Health from WIT and an MA in Health Promotion from NUI Galway. He also has a PhD in Physical Activity and Active Travel.

Lambe, B., Murphy, N., & Bauman, A. (2017). Active Travel to Primary Schools in Ireland: an Opportunistic Evaluation of a Natural Experiment. Journal of Physical Activity and Health, 1-23. In press

Kirwan L, Lambe B, Carroll P.  (2013) An investigation into the partnership process of community based health promotion for men.  International Journal of Health Promotion and Education 51(2): 108-120

Lambe, B., Murphy, N. and Bauman, A. (2012) Drivers of active travel in two Irish towns–qualitative and political perspectives. Journal of Medicine and Science in Sport 15:S272

Lambe B., Connolly C. and McEvoy R. (2008) The determinants of lifestyle counselling among practice nurses in Ireland. International Journal of Health Promotion and Education 46 (3) 94-99

Harrison, M. and Lambe, B.  (2003) Reproducibility of the triglyceride response to mixed meals determined by dry chemistry analysis.  Journal of Sports Sciences 21(4) 276-77 (S)

Lambe, B. (2013) The potential for childcare services in Waterford to promote Smarter Travel. A report prepared for Waterford County Childcare Committee and GO Dungarvan

Keynote presentation. ‘Back to the future; re-engineering activity and movement back into our lives’ Safefood Obesity Conference; Dublin, November 2018

‘The effectiveness of active travel initiatives in Irish provincial towns: an evaluation of a quasi-experimental natural experiment’, ITRN conference, August 2016

Lambe, B; Murphy, N; Lane, A. & Bauman, A (2013) Who is most likely to consent to follow-up in a longitudinal cohort study of active travel in Irish adults? International Society for Behavioural Nutrition and Physical Activity Conference. Ghent, Belgium.

Lambe, B; Murphy, N; & Bauman, A (2013) Is there potential to promote active transport with primary school children? PE-PAYS Conference. Dublin

Barry teaches undergraduate modules in the following areas; motivational interviewing (MI), physical activity promotion, research methods and gender specfific health promotion. He has supervised research at both at undergraduate and postgraduate level. He also teaches on the Postgraduate MSc in CBT and MI.

Barry has worked as a Physical Activity Promotion Officer in the Health Service Executive where he was actively involved in establishing and co-ordinating a GP Exercise Referral Programme. He later worked for the Irish College of General Practitioners as a research assistant on a project to scope the feasibility of introducing a lifestyle behaviour modification programme into Irish General Practice. Barry has been a trainer for the National GP Exercise Referral Programme and is a member of the Motivational Interviewing Network of Trainers. He is a peer reviewer for Family Practice, Health Promotion International, Perspectives in Public Health and the Journal of Medical Internet Research.

Barry is a triathlete who has completed several marathons and Ironman triathlons.