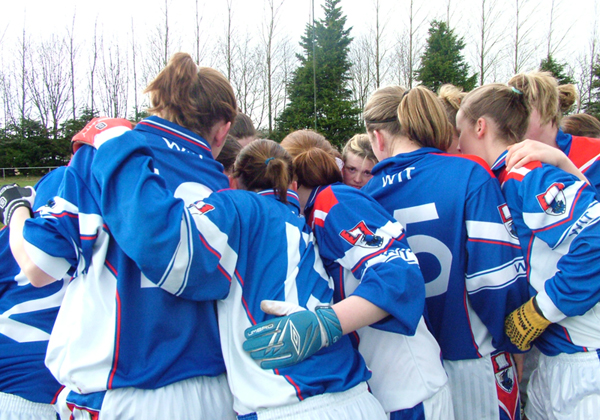 The Institute has a tremendous history in sport and recreation with over 30 sports clubs and upwards of 25 societies registered each year. The WIT GAA Club is the best known and most successful with its hurlers having won the Fitzgibbon Cup on seven occasions, including three in the last five years.

Camogie is currently extremely strong in the institute with the WIT Ashbourne cup team winning the last four Ashbourne cups and league titles in 2009 and 2010, as well as the Camogie fresher All Ireland in 2009-10.

Rugby is also very strong in WIT, the WIT men's rugby team have reached the last three All Ireland finals, winning in 2008 and 2009. Ladies rugby is also very strong, with two recent WIT graduates, currently playing for the Ireland Rugby team. Ladies Gaelic Football is also extremly strong in the institute at the minute with the Ladies Gaelic Football Team winning the Giles cup in 2011.

Other sports that feature high in the Institute include; Ladies and Men’s Football, Soccer, Athletics and Basketball. There is also a lot of support for a wide range of other sports such as; Kayaking, Badminton, Judo and Sailing. These clubs have very strong membership bases and represent the Institute in Intervarsity competitions very successfully. Two of the more active societies within the Institute are the Business and Social Care Societies. All of the Institute’s societies organize various events throughout the academic year.

All of the Sport and Recreational Clubs and Societies in Waterford IT are run through the Clubs and Societies Office.  Through active participation you will develop your social and sporting abilities in addition to gaining an educational qualification.  These can be of immense benefit when you go job hunting after finishing college.  The clubs and societies office plays a key role in the life of the institute, assisting students in the organisation and running of these clubs and societies.  If you need help or advice on any particular activity please do not hesitate to call to the clubs and societies office to discuss it.

The office and the staff are here to facilitate you and your club or society.  We have a full time co-ordinator to assist you with any help you may need to organise your particular activity, so get involved in some of the sporting and social activities of the institute and see college life from a different angle.

The Institute has a tremendous history in sport with over thirty clubs registered each year. The GAA Club is the best known and most successful and while Camogie and Football Men’s and Ladies are very strong, Hurling is the major success story. Having won the Fitzgibbon Cup for the first time in 1992 the club has gone on to win it on six more occasions including four in the last eight years. While GAA has been the major sport in the Institute since that clubs foundation twenty-eight years ago, a lot of work has gone into all of the Institutes other major sports such as Soccer, Rugby, Athletics and Basketball over the past number of years.

There is also a lot of support for all of the other sports, and in some cases these clubs have very strong membership bases and represent the Institute in Intervarsity competitions very successfully. Examples of such sports include Kayaking, Judo, Sailing and Badminton.