Ladies football in WIT is well established in 3rd level competitions. The club has gone from strength to strength in the last number of years, with fresher, junior and senior teams.Players from all corners of Ireland compete for the college, with players of all levels of ability from junior to senior inter county and the club has fostered a great spirit in the past few seasons. In 2011 the club achieved success by winning the Giles Cup for the first time in its history. The girls will be hoping to add to last years Giles Cup success and there is top Intercounty players currently representing WIT. The Division 2 panel had a successful year with a Munster Donaghy Cup win over Mary I. All are welcome to get involved, be it playing or even in club administration.

Another standout player for the WIT team this year. Her forward minded thinking led to a lot of scores in this year’s campaign. A half back that defends well and noted for getting a score or two. As only a fresher this year she has a big future ahead.

Noelle Connolly (Galway):
The Galway native had a great year in the WIT colours as her performances throughout the year led to her receiving the WIT Ladies Football player of the year award. Playing at full back she set up attack after attack while not giving her marker an inch.

Lorraine Keena (Offaly):
A dual star who also plays corner back for the Ashbourne cup team was a great addition to the team and helped the team reach the Giles cup weekend in Belfast this year. Her ability to read the game is second to none giving forwards a hard time.

Marguerite Revins (Waterford):
The Waterford native is a huge ball winner for WIT and Waterford. She is able to carry and control the ball ease setting up attacks from both mid field and the half forward line.

Emma won a Junior Football All Ireland last year with Wicklow. She was unfortunate to get injured during the year which limited her playing time on the pitch. A fresher that will be a force for WIT over the next couple of years.

Currently on a soccer scholarship in WIT. She contributed to some vital scores for the team in the big matches this year. Never seemed to be under pressure while she was causing havoc in the other teams defence as she was one of the top scorers in this year's championship.

After a tough injury last year Katie has been one of WIT standout players this year. Her forward mind thinking let to a lot of scores in this year's campaign. As a result of her performances on the field she was awarded Senior player of the year this year.

Emma has made a huge impression in her first year in WIT. She has been one of the most outstanding and consistent players this year. Playing at wing back her work rate is top class covering every blade of grass. Emma has a big future ahead of her.

This Wexford sharp shooter has added a huge amount to the ladies football setup this year. She has a very good eye for goal and helps bring the players around her into the game. Her turn of pace gives the opposition something to think about everytime she has the ball.

WIT second string ladies football team qualified for the semi final of Division 4 with a gutsy performance in torrential rain in Clonrad GAA club, Co.Laois against NUI Galway.
A fine start that saw Aisling Murphy fire to the net ,with Kellie Kearny also raising a white flag early in play for WIT. In a very entertaining half both sides gave it everything and although NUIG did score 1-4 in the opening half, they were forced to kick wide after wide by a resolute WIT defence.
The forward unit inspired by their defenders did some serious damage before the interval with captain fantastic Rosie Keogh drilling to the net and points from Aisling Murphy and Aoife Dillane gave WIT a 2-4 to 1-4 half time lead.

The second half saw both sides battle bravely in the conditions, time after time the WIT defence blocked and won possession in the tackle and once again when the NUIG storm had been dealt with it was an Aisling Murphy goal that drove WIT home to victory with her Wexford colleague Kellie Kearny curling over another fine point too.

The Fresher Ladies Football team have set the standard for Ladies Football in WIT this year. After an early start and long bus journey to Dublin the girls made a great start in their first match of the 1st year blitz in Naomh Mearnog. First up were UL and only a minute into the match Vikki Falconer showed her eye for the green flag by banging home a goal for WIT. Once again Vikki smashed a goal past the UL keeper and was ably assisted by scores from Becky Donoghue and Lorraine Breen. Although UL put up a tough opposition, the WIT girls held strong and at the full time it was 4-2 to 2-4 in favour of WIT. The excellent start unfortunately did not continue for the next 3 games as WIT fell victim to Mary I, Queens and NUIG. However, good performances from Eadaoin Miskella, Emma Corcoran and Aileen McCarthy and scores from Vikki Falconer, Orla Meagher and Becky Donoghue restored pride in WIT’s efforts in the competition.

Losing these matches meant WIT did not qualify for the Cup semi finals but instead were placed in the Shield semi final vs Dublin City University. The girls came out with completely changed attitudes for this semi final, this was seen in an inspiring run from captain Emma Corcoran who received a short kick out and preceded to sprint the length of a pitch and banged home a goal! More goals from Becky and Vikki threw off the DCU challenge and thanks to some hard running and work rate from Shauna O’ Donoghue, Louise Dineen, Lorraine Breen, Melissa Gilbert and Caitriona Doyle; DCU only managed 1 score in the first half. WIT came out all guns blazing again in the 2nd half and overcame DCU with some great plays. The final score was WIT 7-1 DCU 3-1, next up was Mary I in the Shield Final!

The girls’ never say die attitude from the semi final carried through to the final. Becky opened the scoring with a well taken point and followed after goal machine Vikki Falconer slotted yet another goal past the Mary I keeper. Emma Corcoran again travelled up the field from the back line to score a goal and at half time WIT were well ahead with 2-1 to no score. Throughout the 2nd half WIT put an immense amount of pressure on the Mary I team especially in the first few minutes. Shauna O’ Donoghue and Lorraine Breen were putting in a serious effort in not allowing Mary I girls to get past them. One last goal from Vikki and traded points between Becky and Vikki sealed the win for WIT in the early stages of the 2nd half. WIT then got tired in the dying minutes and let 2-1 slip past them, however the girls did enough and when the ref blew the final whistle the first bit of silverware of 2012-2013 was coming back to Waterford!

10. My Earliest Sporting Memory Is? Winnig the all Ireland feile

11. Funniest person is the WIT GAA Club is?  Bridin Doyle.

12. When You Were Growing Up What Did You Want To Be? Guard

13. My Most Treasured Possession?  family

14. Biggest Insult? Been mistaken for my sister

16. Stranded On An Island, What Are Your 3 Essential Items?  Phone , laptop and mobile internet 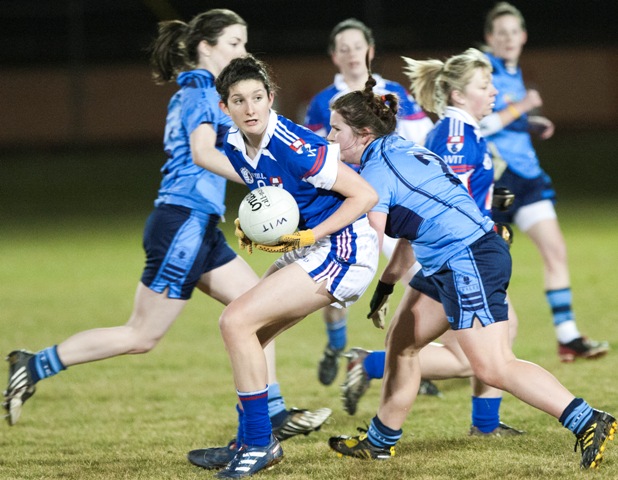 4. High Point in Sporting Career: Winning the 2011 Giles Cup with W.I.T. Ladies Football Club, Playing with Waterford  Ladies,  (Hopefully will have won an Intermediate Munster final with Waterford Ladies on the 14th July)

6. Other Achievements? Getting into Mason’s in a tracksuit..

9. Favourite Cartoon As A Kid? Animaniacs

10. My Earliest Sporting Memory Is? My brother bringing me off playing soccer, football and hurling with me

11. Funniest person is the WIT GAA Club is? Mairead O’ Connor..she’s great for a rap battle!

12. When You Were Growing Up What Did You Want To Be? Taller…success!!!

13. My Most Treasured Possession? Pandora bracelet

15. My Signature food dish Is? Wild salmon on a bed of asparagus with a watercress dressing.

16. Stranded On An Island, What Are Your 3 Essential Items? Jacobs crackers, water, ball

17. Stranded On An Island, Who Would You Most Like To Keep You Company? Bear Grylls

18. Favourite book?  “Come What May” by Donal Og Cusack