Thirteen years after its Abbey Theatre première, Jim Nolan's Blackwater Angel is to be produced for the first time in the playwright's native city.

Directed by the author in a co-production between Garter Lane Arts Centre and Waterford Institute of Technology, and funded by the Arts Council and Waterford City Council, the play will open at Garter Lane Theatre, Waterford on Monday 17th November, with previews on Friday 14th November and Saturday 15th November, bookending the Centre's thirtieth anniversary celebrations which kicked off in February with Nolan's latest play, Dreamland.

Set in County Waterford in the summer of 1666, Blackwater Angel deals with the far-reaching consequences of an imagined encounter between the notorious real-life healer and former Cromwellian soldier, Valentine Greatrakes, and a company of English Travelling Players who set up camp in a forest near his Cappoquin home in Affane.

Described by The Stage as 'a truly magical and powerful piece of theatre,' Blackwater Angel is ambitious both in scale and in its thematic concerns and according to Garter Lane Artistic Director, Caroline Senior, the production will be an appropriate conclusion to the arts centre's anniversary year. "Now in his third year as Theatre Artist in Residence, Jim's productions of Dissident, On the Razzle and most recently Dreamland represent the public dimension of a residency which has also seen him undertake an ongoing mentoring process with emerging local playwrights. Blackwater Angel has been produced in Dublin and London and there have also been amateur productions in the USA and Canada but 13 years after its Abbey première, we are delighted to be bringing it home."

For his part, Nolan is pleased that the play will at last be produced in his home town and is particularly enjoying the collaboration with WIT, whose students in a range of disciplines are already working on pre-production for the play. "We have been working with young people from the Art & Design, Architecture, Music and Theatre Studies Schools and along with providing cast members, I expect that the production poster, the set design and soundtrack will emerge from what is proving to be a very stimulating collaboration." 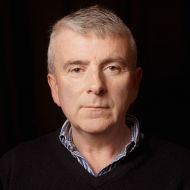