The Long Ride - a screening and panel discussion

Contact: Registration while not required will help with arranging catering. Refreshments will be served from 3pm. 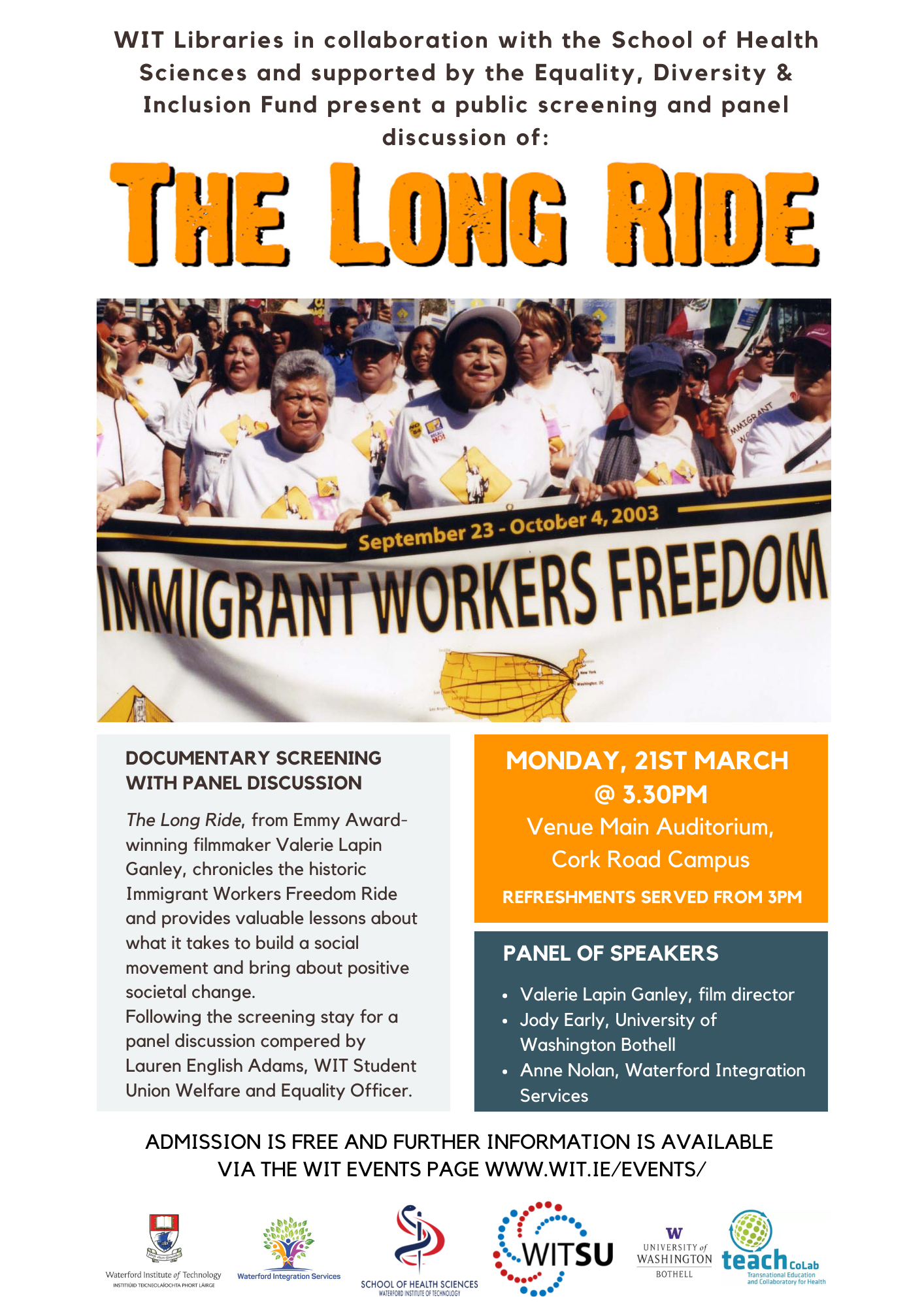 WIT Libraries in collaboration with the School of Health Sciences and supported by the Office for Equality Diversity & Inclusion present a public screening of The Long Ride documentary which will be followed by a panel discussion.

This event is funded by the Waterford Institute of Technology Equality, Diversity & Inclusion Fund 2021.  This Fund is specially designed to facilitate innovative and creative EDI projects by staff and students which promote EDI in Waterford Institute of Technology and which may also have an impact on wider society. Special thanks must also go to the Student Engagement School of Health Science Project (SESH Project), the Health Sciences Student Ambassadors and WIT Student Union for their support with this event. 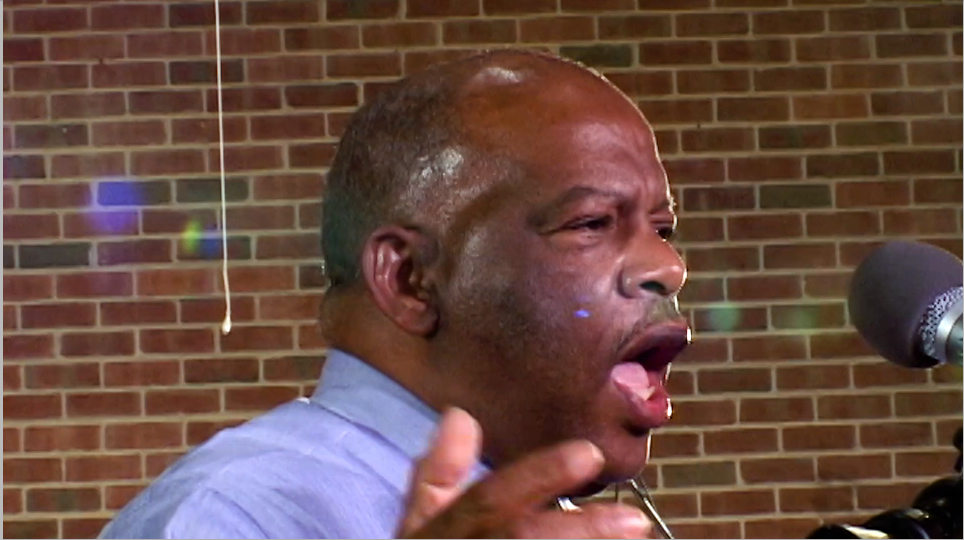 The Long Ride is a timely new feature-length documentary about the historic 2003 Immigrant Workers Freedom Ride that sparked the birth of the new Civil Rights Movement for immigrant workers in the United States. Alarmed by the increase in immigration raids, deportations, family separation, and attacks on workers’ rights, more than 900 immigrants and allies traveled across America to focus public attention on the plight of immigrant workers and to call for reform of the broken immigration system. They were inspired by the 1961 Civil Rights Movement Freedom Riders who risked their lives fighting to end segregation. The film chronicles their journey and the on-going fight for immigrant rights to this day.  With Freedom Riders as our navigators, the film puts a human face on this controversial issue and examines the human costs as lawmakers overhaul the U.S. immigration system.

Following the screening stay for a panel discussion about the documentary and its relevance to immigrants living in Ireland in 2022. WIT Student Union Welfare and Equality Officer Lauren English Adams will compere the panel discussion.

Valerie Lapin Ganley is a filmmaker and activist.  Her most recent film, The Long Ride, won Best Documentary at the Immigration Film Fest; Outstanding Feature Documentary at Festival de Cine Latino Americano; and an Honorable Mention at Contra El Silencio Todos Las Voces in Mexico City.  Her film Shalom Ireland aired on RTÉ, Ireland's National Public Broadcaster and has been shown at more than 100 film festivals and community screenings around the world.  Valerie has a long history working in the Labor and Immigrant Rights Movements.  She was Communications Director at UNITE HERE, Local 2 and Campaign Director at the Coalition for Clean & Safe Ports, an effort to organize port truck drivers.  She was a leader in the successful effort to declare Pacifica a sanctuary city.  Valerie currently serves on the Board of Irish Culture Bay Area, producer of the Irish Arts and Writers Festival; and the Immigration Film Fest Steering Committee.

Dr. Jody Early is a professor in the School of Nursing and Health Studies at the University of Washington Bothell. As a social scientist and health education specialist, her teaching, scholarship, and praxis largely examine the bio-psycho-social, cultural, and systemic factors that influence the health and well-being of individuals and communities. Her work in higher education and public health spans over 20 years and  involves the application of critical pedagogies and community based participatory research (CBPR) to address barriers to health equity and health education. She works in partnership with communities to co-design, implement and evaluate tailored programs, resources, and technologies that are culturally rooted and community-driven.

Dr. Early’s recent projects include the development of Basta! Prevent Sexual Harassment in Agriculture, an award-winning and evidence-based Spanish/English curriculum and training co-developed in partnership with Latina farmworkers and a number of cross-sector stakeholders across Washington State. She is also co-leading Mental Health Matters (La Salud Mental Importa), a community-driven prevention program in Washington State that supports early intervention for lives impacted by mental illness by training Peer Mental Health Navigators and using arts-based approaches for community outreach and education. This program is in partnership with Verdant Health, the National Alliance for Mental Illness (NAMI), the Latino Education and Training Institute (LETI), MAS (Movimiento Afro-Latino Seattle), and an expanding network of health care providers and partners.

Jody’s research also examines the effectiveness of tailored digital technologies and pedagogy in higher education, public health, medicine, and healthcare.  Her recent article, published in the journal, Health Promotion Practice, focuses on “digital disenfranchisement” during the COVID-19 pandemic and how access to broadband internet is a social determinant of health. She is also co-editor of the upcoming text, Be the Change: Advocacy, Policy, and Community Organization in Public and Community Health Education (with Oxford University Press).

Anne from, Ireland is a Humanitarian supporting vulnerable migrants since 2006. As a Human Rights practitioner and co-founder of Waterford Integration Services, she ensures that Ireland lives up to its commitment to fully protect and serve those who are fleeing global persecution. With an MSc in Rural and Community Development from University College Dublin, she has a proven track record in Integration project development and management providing technical expertise and leadership in this sector. Anne is experienced in interagency working to maximise outcomes within the community.

As a Cultural Anthropology champion, she is a skilled researcher, policy developer and implementer and can adapt and interact in a multi-cultural environment. Anne is now focussing her work through effective inclusion, integration and community building strategies (particularly for vulnerable migrant women and children in Waterford City & County) which is evidenced through recognised programmes Regionally, Nationally, and Internationally. In 2021 Anne was elected as a Board member of the European Network Against Racism (ENAR) and promotes anti-racism strategies at local, national and global level.

Anne’s response to the Covid-19 pandemic is to formalise and promote Social Enterprise opportunities through the Creative Industries sector for adults to promote financial independence and security.  Developing a Migrant Youth Ambassadors Leadership programme to address issues of racism, discrimination and exclusion is progressive.

An experienced lecturer at third level and as a training provider, Anne has delivered presentations at the United Nations, and other international and academic venues. 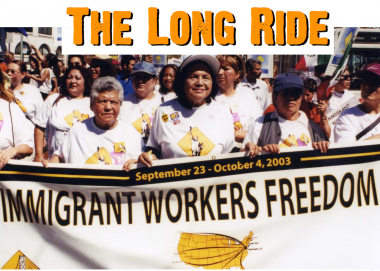