The film Creadan: A Sense of Place uncovers the story of a remarkable Mesolithic site on the Waterford Estuary. Archaeologists, geologists, ecologists and local storytellers investigate the unique traces left by Ireland’s first settlers 10,000 years ago on Creadan Head.  The film will be launched during Heritage week as part of the exciting web event Creadan - a new understanding of Ireland's Ancient South East.

The film produced by one of Ireland's leading television production companies Nemeton TV, was developed within WIT's Creadan research project, led by Joy Rooney, funded by the European Maritime and Fisheries Fund and administered through An Bord Iascaigh Mhara. Based in Gaeltacht na nDéise, Nemeton TV has a longstanding and successful relationship with WIT. In conjunction with Údáras na Gaeltachta they offer the award-winning Higher Diploma in Arts in Television and Media Production.

Creadan - a new understanding of Ireland's Ancient South East is a free two-part event hosted by WIT in partnership with Waterford Chamber of Commerce on Thursday, August 19th at 7pm. Part one will introduce the work of the Creadan - Waterford Estuary Steering Group (SG) and the landscape of Creadan through this new short documentary film. Part two will consist of a lively panel discussion, where we explore the significance of Creadan as it shapes a new understanding of the settling of Ireland’s Ancient South East.

Register now to book your place.

Watch the trailer for 'Creadan: A Sense of Place' now.

Creadan - Waterford Estuary Steering Group works with local community groups, local and national governance, the heritage and environment managing authorities in Ireland and in compliance with the Climate Change Adaptation Sectoral Plan for Built and Archaeological Heritage. It’s timely now that together we take action to protect, conserve and consolidate our understanding of the prehistory of South East Ireland and support our heritage related climate adaptation initiatives so that our local coastal communities and their visitors can support our fisheries and their rich heritage while enjoying access to the benefits of this unique coastal heritage for generations to come. 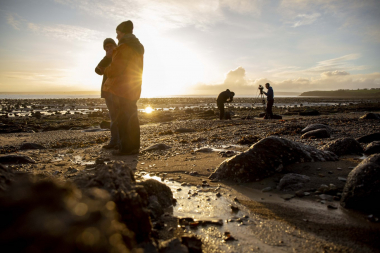