Mount Prospect at Garter Lane in association with WIT

Jim Nolan directs the Una Troy play 'Mount Prospect' with set, sound and graphic design from students of the School of Humanities at WIT.

The play takes place nightly at 8pm in Garter Lane Theatre Waterford from 10 to 17 November.

A savage critique of class prejudice and the position of unmarried women in 1930’s Ireland, this is a play not to be missed.

Garter Lane is delighted to be bringing this production to the stage in association with WIT.

About Una Troy (aka Elizabeth Connor)

With strong Waterford connections, Una Troy was born in 1910 in Fermoy, Co Cork. She began her writing career under the name of Elizabeth Connor, and her novels from this period are Mount Prospect (1936) which was banned in Ireland; and Dead Star’s Light (Methuen, 1938). In 1940 she adapted Mount Prospect for the stage, winning the Shaw Prize from the Abbey Theatre, Dublin, where it was successfully produced. She continued to write for the Abbey Theatre, producing three more plays: Swans and Geese (1941), Apple A Day (1942), and Dark Road (1947). Her novel 'We Are Seven' was adapted as the film 'She Didn’t Say No' and premiered in 1958. The film, with Waterford’s Anna Manahan in the leading role was England’s official entry in the Brussels World Film Festival and was banned in Ireland. Beginning in the mid-fifties she published all her work as Una Troy, producing fifteen novels, published in both London and America. 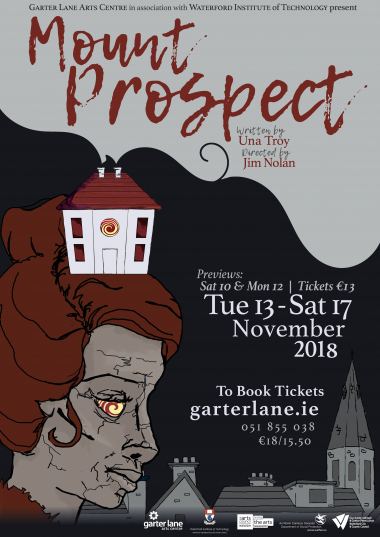