Premiere of a New Generation of Nemeton and SETU Filmmakers

It’s an exciting time for this year’s talented emerging filmmakers at Nemeton TV and South East Technological University. The Higher Diploma in Television and Media Production students will premiere their films on the 11th of May at 1pm in Dungarvan’s Cinema. Once again, there is a fascinating range of compelling films on show this year. Some of the films have already won awards while others will soon be showing in festivals around the country and on TG4.

An Rinn director Seanie McCraith focuses on a local story in his moving documentary An t-Ancaire (The Anchor). In 1912, the Marechal de Noailles ship sank off the Waterford coast.  Seventy four years later in 1986, Baile na nGall publican Mick Ó Uallacháín set out with divers to bring the ship’s anchor ashore. “Using archive footage, reconstruction and interview, I wanted to show the challenges of the journey,” says Seanie.

Cork filmmaker Fay Langley presents highlights from her record of this year’s powerful series of concerts at Tionól Nicholáis Tóibín in An Rinn. Featuring some of Irelands most well-loved traditional artists including Steve Cooney, Edel Fox, Mick O'Brien and Ann Mulqueen, the full concerts will also be available online. Fay said : “It was an honour and so enjoyable to film these extraordinarily talented musicians.”

Tullamore director Seán Hughes was inspired to make his first poetic documentary after living under the magical spell of Cnoc Bhreánnáin in Corca Dhuibhne. Sean says: “In ‘An Cnoc’, I wanted to explore what effect Mount Brandon had on the minds and lives of those living in its shadow.”  The film features broadcaster Dara Ó Cinnéide and his father, the poet Ceaití Ní Bheildiúin and of course the mountain itself.

Belfast filmmaker Niamh Ní Ruadhagáin’s short lyrical drama [f]Uaim has just won the coveted TG4 BLOC prize at the Student Media Awards. The film was inspired by Niamh’s experience of moving to another country shortly before the pandemic began. “We can virtually all relate to the story about the silence of the world around us and how we dealt with the weight of isolation. But it has a happy ending!” she says.

In his energetic short film Beothach Beo (Alive and Kicking), Damian McElgunn from Belfast travels back to the 1970s Northern Irish punk scene. Celebrated musicians from Stiff Little Fingers, the Undertones and the Outcasts reflect on how music changed their lives during the Troubles. Damian says: “There was an incredible energy at the time. The atmosphere was as important as the music.”

For his first documentary Big Griff, filmmaker Nathan Griffin takes us on an emotional journey to celebrate the life of his uncle Martin Griffin who died in 2021. Considered one of Donegal’s finest footballers, the lively Big Griff helped bring his county to an unforgettable Ulster final in 1983. “I was inspired by the stories I heard about my uncle and wanted to explore who he was,” says Nathan.

In his documentary An Fear as Baile Mhac Cairbre, radio broadcaster Nigel Kelly focuses on the extraordinary life of local hero Micheal Ryan. Ryan has overseen or been involved with 32 All-Ireland winning teams in his long coaching career. Nigel says that “Michael has a passion and energy of which the like has rarely been seen.”

The Postgraduate Course in Television & Media Production commences again in September 2022 and is run by the South East Technological University in association Nemeton TV, one of Ireland’s leading production companies, and Udarás na Gaeltachta. It is widely regarded as one of the most industry-focused courses in the media sector and has gained a high profile in the industry with its excellent graduate employment record. 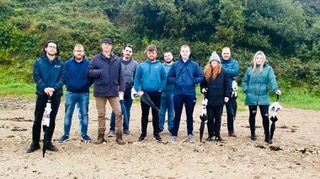