The project, funded by the Growth Hub Entrepreneurship Education Bursary, sets out to foster a new generation of music industry professionals for the region

Students on two very different courses at Waterford Institute of Technology (WIT) are gaining invaluable real-life experience of promoting an event for a band.

The BA (Hons) in Music and Bachelor of Business (Hons) students will provide music lovers in Waterford with an opportunity to see a world class act that would have otherwise bypassed the city.

Through a project funded by the Growth Hub Entrepreneurship Education Bursary at WIT, music and final year business students have teamed up to run and promote this event as part of their marketing and arts management classes.

Growth Hub Entrepreneurship Education Bursaries support the development of entrepreneurial mindsets for students across all WIT programmes and level of study, from apprenticeship to PhD.

The project sets out to introduce music and business students to the world of event organisation and promotion, highlighting opportunities for employment that are available in the region.

Mark Graham, a lecturer on WIT’s four-year honours Music degree explains that the project sets out to foster a new generation of music industry professionals for the region.

He, and School of Business lecturer Sinead O’Keeffe both have brought their students together to work on this project. “The opportunity for students from different disciplines to work together and to bring their different skill-sets to organise and promote a live event is challenging but extremely valuable for the students and will stand them in good stead in their future careers,” notes O’Keeffe, whose final year Sponsorship and Event Marketing module students are participating.

“The real-world experience of promoting their own event, coupled with guidance from industry professionals, has proven to be an invaluable learning experience that will also have a positive impact on the cultural landscape of Waterford City,” Graham adds.

Waterford was not originally included on Saint Sister’s current tour to promote their latest album Where Should I End, released in June of this year, notes Graham.

“Waterford often gets overlooked when it comes to bands touring Ireland, part of the reason for this is the lack of a dedicated live music venue, and the resulting lack of promoters and agents in the region.”

It will also provide music lovers in Waterford with an opportunity to see a world class act that would have otherwise bypassed the city.

Tickets are €17.50 (€12.50 for students, seniors and unwaged) and are available from the Garter Box Office and from www.garterlane.ie

Saint Sister have a Best Irish Act award from The Irish Times, an award from RTE Radio, and nominations for both the Choice Music Prize and the Northern Ireland Music Prize under their belt.

Morgan McIntyre and Gemma Doherty seamlessly blend synth-pop, contemporary classical and folk traditions to create a beautiful sound that is uniquely Saint Sister. The band have clocked up multiple television appearances, have garnered critical acclaim for performances at the National Concert Hall, and a week after this show in Waterford they hit The Olympia Theatre Dublin for a headline show to top off their Irish tour. 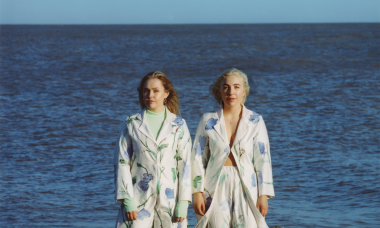