Third Year architecture students at WIT Adam Byrne and Margaux Duroussay have just been announced as joint winners of the Sigginstown Tower House Design Competition. The competition, which was open to all students of architecture throughout Ireland, sought proposals for the creative reuse of a medieval tower and early classical structure in a picturesque location near the Wexford coast at Carnsore Point.

The competition was judged by an international panel including Dublin architect John Begley, Connecticut based architect Richard Swann, conservation consultant Catherine McLoughlin and France based project manager Bena Stutchbury.  Competition sponsor and New York resident Elizabeth Jones was delighted at the outcome. ‘We were extremely impressed with both the quality of the presentations as well as the imaginative range of responses. I was surprised to see that students were capable of working at this level.’

As a bonus, another architecture student at WIT, Daniel Simon, received an honourable mention. The winners will receive their cash prize of €500 euros at a special ceremony.

Aleksandar Kostić,  Acting Head of the Department of Architecture congratulated the winners and thanked their tutor Garry Miley for including the student competition so smoothly and successfully into the semester programme.

"We are delighted with the news as it is always good to have our students abilities validated by people from outside the college, and particularly by an international jury," said Kostić. 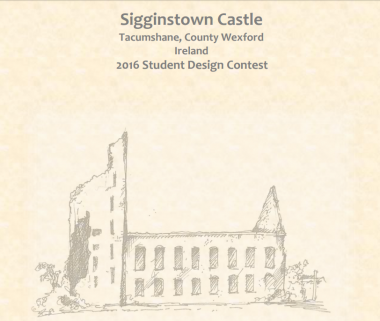