Lifesaving Foundation and WIT hope to save lives through research

The Lifesaving Foundation and WIT’s School of Health Sciences have teamed up to reduce drowning death numbers and establish a drowning research centre.

The long-term aim of the partnership is to establish a permanent world class drowning research centre at WIT. The immediate aim is to reduce drowning death numbers through researching the concept of self-rescue in life threatening situations. This is being undertaken in co-operation with An Garda Síochána and An Garda Síochána Retired Members Association.

Initial funding will be provided through the Doherty Police Research Fund, established in memory of the late Garda Commissioner Eamonn Doherty. Commissioner Doherty is best known for his successful recommendation to transfer air sea rescue services from the Air Corp to The Irish Coast Guard.

According to Lifesaving Foundation chairperson Brendan Donohoe for over 100 years the main focus of lifesaving organisations has been on teaching the public the Do’s and Don’ts of water safety, explaining how not to get into trouble, and on training lifesavers and lifeguards to rescue those in danger in water.

This has been very successful. A hundred years ago, when Ireland’s population was two and a half million, the number of drowning deaths was over 200. Today, with a population close to five million, the number of drowning deaths is just over 100. The 21st century lifesaving challenge is to teach the public how not to drown if they find themselves in trouble in water – to self-rescue.

Announcing the partnership WIT President Prof Willie Donnelly commended the work of The Lifesaving Foundation to date and added that the Institute looks forward to developing world-class drowning research including priority areas such as self-rescue. Prof Donnelly said that the new partnership demonstrates the diversity and impact of research topics that WIT researchers work on with a wide variety of organisations.

Professor John Wells, Dean of the School of Health Sciences, welcomed the new partnership saying that the Institute’s research capability combined with the Lifesaving Foundation’s drowning expertise would make for a symbiotic relationship benefitting all at risk from drowning worldwide. The Foundation presented a large number of drowning books to WIT Library as the start of a major drowning research resource.

Lifesaving Foundation Secretary John Connolly explained that up to now drowning research has been conducted on an ad hoc one-off basis. The Foundation board decided that it was time to put structure on its research and they were delighted to do this in partnership with Waterford Institute of Technology.

The launch was attended by representatives from An Garda Síochána Water Unit, Garda Síochána Retired Members Association, Waterford Marine Search and Rescue, The Irish Naval Service, and Waterford Fire Service who listened to presentations by Foundation representatives Professor Joost Bierens (Editor of The Handbook on Drowning, The Netherlands) and Dr Stathis Avramidis (The Hellenic Centre for Disease Control, Athens). 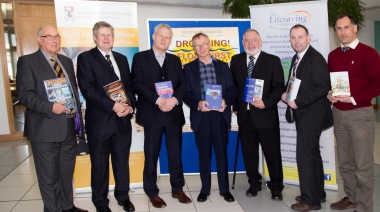 The Lifesaving Foundation presented a large number of drowning books to WIT Library as the start of a major drowning research resource.