And finally.... First year mature student Tom Boyle, a resident of Co Wexford, proves it’s never too late to go back to college, as he turns 79

Returning to education is something that Tom Boyle wishes he had done 10 or 20 years ago.

“I’m a bit emotional, the kindness is overwhelming. From the first day, everyone has been so welcoming. The WIT staff and lecturers are fantastic, I can’t say enough about them,” he said following a celebration of his 79th birthday at WIT.

Father to six girls and one boy, Tom has had his hands full all his life as well as being a taxi driver for more than 20 years.

Tom’s wife Phyllis was by his side at the party and was welcomed by a chorus of Happy Birthday from a canteen full of students.

“He has always said he wanted to go back and I tell him; follow what you want to do. I always support him with what he wants to do. He really is living the dream,” his wife Phyllis said.

Following the College Street students' rendition of Happy Birthday, Tom addressed the room to thank first and foremost his wife Phyllis, for her support as well as lecturers and to express his feelings for the Institute, “I have to thank the people who lecture us, they are marvellous. This is the place to be and everyone enjoys being here, and if I can help you enjoy being here that’s great.”

Course leader Deirdre Adams organised a birthday celebration for Tom at WIT’s College Street Campus on Friday 28 October, as well as baking cakes and treats with other lecturers from the department to feed the attendees of Tom’s celebrations.

Deirdre said in her speech, “Tom sends a really inspirational message to us all. He had the imagination to come to college in his late 70s and had the courage to do so. We may be the lecturers but we also learn so much from Tom.”

Tom’s neighbour Sarah Daunt Smyth is studying Law alongside Tom and said, “Tom is the lovliest, warmest gentleman, who would help anyone out. You might think with younger people there would be a divide, but he brings them all together.”

The mature student is making an impression across the college, with 4th year Legal Studies with Business student Michaela Itaire saying, “We all have so many books and Tom brings this mini suitcase to college and it gave us all the great idea to avoid carrying so many books around. Tom is so inspiring, he shows us that college is about applying yourself and putting in the effort.”

Tom spent one year between 1955 and 1956 studying Horticulture at Johnstown Castle, Co. Wicklow and was the Chairman of the Ramsgrange Horticulture Society for three years and is still a member. 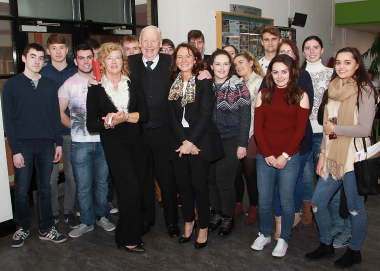 “I have to thank the people who lecture us, they are marvellous. This is the place to be and everyone enjoys being here, and if I can help you enjoy being here that’s great.”