A third year BSc (Hons) Hospitality Management student, Kathlyn Leahy has been awarded a Medallion for Excellence for her high performance in the World Skills competition which took place in Abu Dhabi recently.

Kathlyn, who is from Glendine in Kilkenny City was also awarded a Gold Medal as the top Irish competitor.

The Head of the Department of Languages, Tourism and Hospitality at WIT, Ray Cullen who served as Skills Competition Manager for Restaurant Service at Abu Dhabi, praised Kathlyn’s demonstration of her skills.

“Kathlyn Leahy had a very good competition considering that it was the biggest Restaurant Service competition in the history of World Skills with 37 countries competing,” he said. Kathlyn’s achievement and indeed that of the other WIT students is all the more notable because of the 40C temperatures reached during the competitions over the 4 days.

The competition, which was the 44th World Skills Competition, took place 15-18 October 2017. There were 51 skill competitions from six skills sectors. Competitors from nearly 60 Member Countries and Regions will take part, and close to 1,300 competitors.

WIT was represented by 2 of the 14 Irish competitors at World Skills Abu Dhabi 2017. They are David Donegan in Plumbing and Heating; and Kathlyn Leahy in Restaurant Service. David also came home with a Medallion for Excellence.

In addition,  CIT's Gavin Lyne has been training for the World Skill under the eye of WIT lecturer Adrian Cunningham and the Irish World Skills 'expert' in the Automobile Technology category. 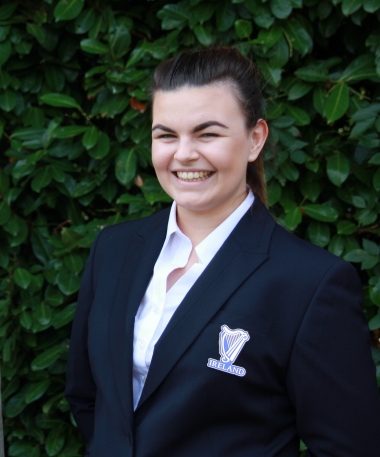