10 things to make you fall in love with Waterford

WIT Law graduate Aoife Bulfin moved back to Waterford to take up her role as Graduate Ambassador for WIT, here she shares her take on Waterford

So what is the appeal of County Waterford you ask? Why is it an ideal destination for people who move for jobs undergraduate and postgraduate students from far flung places like Mayo to Wales and Kuala Lumpar? Not to forget the 33% of our students from Waterford who love their county so much that they stay here to study.

Apart from being home to the largest third-level institute in the south east with close to 10,000 students over five campuses across the city, Waterford boasts a number of unique treasures, it is Ireland’s oldest city, it is home to the Copper Coast and how could anyone forget the Blaa?

Sitting on the South coast of Ireland has its perks. There are more beaches than I can count and each offers their own uniqueness. Tramore is known nationwide, city dwellers flock once we reach a certain degree of temperature, and who could blame them? Tramore, Dunmore East, Woodstown Strand just to name a few! If you are visiting County Waterford don’t forget to travel to the beaches less well known, like Kilfarassy, and all those along the Copper Coast, not to forget Clonea and Ardmore.

County Waterford is the bees knees when it comes to activities and adventures. Top of your list needs to be surfing. The Dunmore East Adventure Centre, Ardmore Adventures or the Freedom Surf School in Tramore are just a short list of activity centres to visit. No visit to county Waterford is complete without a visit to Mahon Falls, in the Comeragh Mountains. The open plain and waterfall make for an ideal hike. Let’s not forget the arcades in Tramore. Many a week have I spent a Saturday afternoon throwing a basketball into a moving hoop and cheer as the little pink tickets spit out afterwards. Goodbye pay cheque.

Although this is not necessarily my cup of tea, for all the history buffs out there, Waterford city and county have a huge amount to offer. The Waterford Treasures Medieval Centre in the city centre is supposed to be the way to go. Inside they have Henry VIII’s Cap of Maintenance, the great parchment Book of Waterford and the Relic of the True Cross. If you’re into that kind of thing. It is within Ireland’s Ancient East and is Ireland’s oldest city and for everyone who is equally as obsessed with the show Vikings as I am, how could you resist visiting the Viking Triangle? The city was founded by the Vikings in the 9th Century after all.

A photo posted by Waterford Viking Triangle (@waterfordvikingtriangle) on Feb 21, 2016 at 5:32pm PST

Everyone loves the Copper Coast, let’s face it. For those coming from all over the country, or maybe even the world, the best way I can describe where it is, is between Tramore and Dungarvan. Follow those sign posts! Along the way you’ll see lengths and lengths of sea, cliffs and bendy roads. Even if it’s a bit chilly out, there is nothing like parking up and watching the sea and world go by. We may not be on the Wild Atlantic Way, but this is a serious competitor, and just on the doorstep.

The Blaa. Need I say anymore? Every Waterford person I know is very protective of their Blaa. It’s not from Kilkenny, it’s not from Wexford, it’s Waterford. No really. It’s been granted a protective EU status.  Although some may say it’s just a glorified dusted bap, there’s no denying it’s a tasty glorified dusty bap. Feeling worse for wear? Pop a couple of rashers and sausages into it and Bob’s your uncle. Feeling fancy? Throw in a bit of parma ham, goats chees and rocket into the bready goodness.

And they've arrived #BlaasForKids - donate €3 to @FocusIreland in #waterford and get a blaa #nyom pic.twitter.com/GlxzkRrMhY

You can’t talk about Waterford without someone mentioning the Sunny South East. Ireland is a four seasons in one day kind of country, but Waterford always seems to be shining. Heading home to Limerick every weekend I find once I hit the Tipp border it gets dreary. Now I’m no meteorologist, but spending my time at the weekends between Cork and Limerick, I can vouch for the “Sunny South East” being factual.

Yes Waterford is full of beautiful beaches and historical gems, but you probably don’t want to be strolling down Tramore prom on a Saturday night. For that, we offer a number of pubs and clubs. There is craic agus ceol go leor pretty much any night of the week in Waterford city. There is a pub for every occasion, the cocktail bar, the chilled out bar and the bar with the live bands. Then slip into one of the late bars or night clubs afterwards.

Each town, village and city throughout the country has their own choice phrases, but in my opinion (second to Limerick of course) Waterford takes the biscuit. Being referred to as the “lack” is not a derogatory term, it is in fact how Waterford people sometimes refer to their other halves. Example, is the lack out tonight? A true Waterford salute, “Well boy/girl.” A simple way to identify a Waterford city person is their use of the letter O. They like to prolong the usage of it in sentences. Example, “I’m not going to schooool today.” Or “Myself and the lack are going to watch a mooovie.”

We’re all sick to the back teeth of hearing about Dublin and its rent incrases. Luckily, we’re not too badly off down here in Waterford. Student accommodation is very affordable as well as being good quality. I found myself living in Dunmore East in a beautiful house for half of what I’d be paying in the capital. Right by the beach. Beat that Dublin! The ideal move for post grads is to find a room in the area surrounding Waterford city. Ardkeen, Dunmore East, Ferrybank. Nice places and reasonable rent. First years tend to go for WIT-run student accommodation and accommodation close to WIT.

Researching prices of student accommodation in work today...all I can say is that I wish I'd gone to Waterford IT ��

This chap needs an honourary mention. In Tramore there stands a metal man dressed in British sailor’s clothes. He is pointing out at the sea where 360 men died after the HMS Seahorse sank. It is a well-known fact that if you hop around the Metal Man three times, you will be married within the year. Now I’ve never put this into practice because he’s on private property, but who am I to knock old fish wives’ tales? 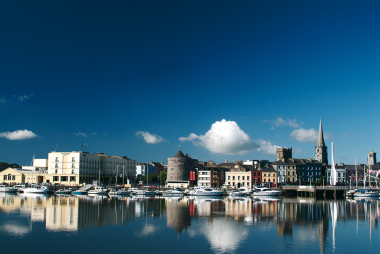