The finals of the Liberty Insurance All Ireland Camogie championship feature on Sunday, 10 September in Croke Park and Waterford Institute of Technology will be strongly represented on the day.
From Ashbourne Cup winning graduates to current sports scholarship students, altogether half of the 30-strong Kilkenny Senior Camogie panel have studied at WIT.
The Kilkenny senior team is also managed by the trio who have been managing WIT senior camogie side for past four years.

Clash of the classmates

Just like last year, two former classmates – soon to be graduates – will face each other in this year’s Final. BSc (Hons) General Nursing students Laura Treacy (Cork) and Julieanne Malone (Kilkenny) will come up against each other in the hope of winning the coveted O’Duffy Cup.
Kilkenny’s Julianne Malone, a former WIT Sports Scholarship student, has just completed her honours degree in Nursing at WIT and says “WIT helped me greatly in relation to balancing my academic work with camogie. The sports scholarship offered me nutritional advice, training programmes and academic support such as grinds.
“When I was on placement in UHW (University Hospital Waterford) last year, it was a particularly challenging time because I was trying to juggle work with training, but the scholarship helped me to overcome that obstacle. My lecturers and class-mates were great, and made my four years at WIT all the more enjoyable,” she adds.

WIT GAA Development Office Katie Redmond said ahead of Sunday: “The WIT GAA Club would like to wish all players and management teams the very best of luck in their respective finals. We would also like to thank and acknowledge all our current and past students for their commitment along with their tremendous discipline towards the WIT GAA Club. The club can certainly be proud of their achievements both on and off the field. Finally, we would like to wish them all the best for the future, both in their sporting discipline and also within their studies.”
The WIT GAA club recently celebrated 35 years of GAA.
WIT's President, Prof Willie Donnelly, wished the camogie teams well. "WIT enjoys further strong links to Croke Park this weekend with 20 students and alumni involved in the Liberty Insurance All Ireland Camogie Finals. On behalf of staff and students we wish the very best to our students and alumni in what I’m sure will be a very exciting weekend of sport. Our best wishes also to the members of the Kilkenny senior backroom team who coached the WIT senior camogie squad to a wonderful victory in the Ashbourne Cup in 2015."

The first game at 12 noon sees the Premier Junior Final between Dublin and Westmeath. Included in the Westmeath side is WIT dual star final year BA (Hons) in Exercise & Health Studies student Julie McLoughlin, who has excelled both in Camogie and Ladies Football since coming to WIT. Julie won an Ashbourne title in 2015 and this year helped the WIT Ladies Football team to win the Division 3 League along with a much sought after Lynch Cup.

Next all eyes will be on the 2pm fixture, as Cork face Meath in what is sure to be an epic encounter and current BSc (Hons) in Agricultural Science student Emma Coffey will be hoping that the Royal county can claim the Jack McGrath Cup. Emma played wing back on this year’s Ashbourne team with her outstanding performances leading to her receiving a nomination for the WIT GAA Club Senior Camogie Player of the Year 2017.

At 4pm and similar to last year’s final, Kilkenny and Cork will once again battle it out in the All Ireland Senior Camogie Final.

A further WIT tie-in is that the Kilkenny senior team is managed by the trio who have been managing WIT senior camogie side for past 4 years, achieving the Ashbourne title in 2015 in their first year in charge. They are: Ann Downey, Paddy Mullally and Conor Phelan - Conor Phelan a WIT graduate of the Bachelor of Business Recreation and Leisure course and is currently back undertaking the Masters in Business Studies part time and is a former GAA Development Officer at WIT. Conor now works in Student Life and Learning in WIT.
Cork Senior Camogie (1):
Laura Treacy - former student BSc (Hons) in General Nursing
This prestigious weekend marks the 5th year of Liberty Insurance as the joint sponsor of the All Ireland Camogie and Hurling championships. Further ticket details are available on camogie.ie. 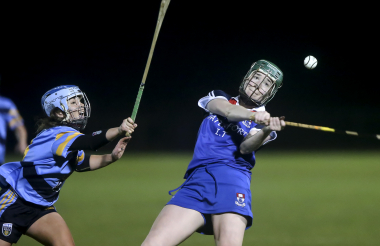