Law lecturer and Head of North American Development Walter O’Leary wins award for his unwavering dedication to students, staff and his department

WIT academic Walter O’Leary was recently bestowed with the John Moore Award for 2017.

This award, now in its 40th year, was established to perpetuate the memory of Fr. John Moore and in appreciation of how as Chaplain, he enriched the life of the institute. This annual award is made to the person who is deemed to have made a significant contribution to the Institute community in some way, be it social, personal, academic or organisational.

Law Lecturer and Head of North American Development Walter O’Leary was the winner thanks to his unwavering dedication to students, staff, his department and WIT in general, over a period of 20 years.

Announcing the award, Chaplain Fr David Keating said “The recipient of the John Moore Award for 2017 is a highly regarded member of staff and a wonderful example of what is best in the institute with regard to his integrity, enthusiasm, loyalty and energy for all people and things that are WIT.”

“Walter’s deep interest and concern for students, his heightened awareness of difficulties facing them and his early intervention has contributed to the well-being, retention and success of many students over the years who might otherwise have gone unnoticed and unsupported.

“A man of action and not just words, Walter’s energy, work-ethic and tireless pursuit of excellence has built a substantial and internationally-recognised Summer School which has given the School of Humanities a global reputation.

“His diplomacy, good humour, attention to the little details and sacrifice of his own personal time and resources has enriched the lives of so many visitors to this institute,” Fr Keating continued.

Honour to receive award from community

Walter was humbled by the award. “It’s an incredible honour to receive the John Moore Award - particularly given that it comes from the entire WIT Community - staff and students. It is also an award which is unique to WIT and, in an overall context, I feel so surprised, but am incredibly delighted, to have been honoured in this way,” he said.

He joined the staff of WIT in 1998 and has worked as a law lecturer, since that date.

“I was appointed Head of Northern American Development in 2004. Along with Dr. Sinead Conneely, I was responsible for the introduction of the BA (Hons) in Criminal Justice Studies. My lecturing focus has been on the areas of Constitutional Law; Equity and Trusts, but I've had a particular interest in the area of Criminal Justice since its introduction,” he added. 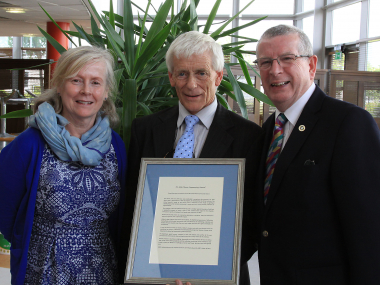