Past and present BA Music students will take to the stage in Central Arts from 10pm on Friday, 19 October offering an entertaining and diverse evening

Graduates from Waterford Institute of Technology have been enhancing the Arts & Entertainment industry both nationally and internationally for 30 years. Waterford based band King Kong Company recently received an award for being Ireland's best live act and they stormed both Áras an Uachtaráin and Glastonbury this summer.
Six members of the King Kong family are graduates of WIT, the band members all met while students in Waterford and one of them now lectures on the BA Music course. The reach and influence of graduates from the BA Music course at WIT is immense.
This year is the 30th anniversary of Waterford's BA Music course and this is a wonderful excuse for some exuberant and musical celebration. The party will kick off in raucous style on October 19th when bands featuring past and present BA Music students will take to the stage in Central Arts from 10PM onwards.
Mark Graham, Music Technology lecturer at WIT and drummer, trombonist and vocalist with King Kong Company is organising the event and he promises it will be an entertaining and diverse evening. "The bands we have playing on October 19th aren't just some of the best in bands in Waterford, they're some of the best in the country. We're lucky to be able to have them play and even luckier that some of them have made Waterford their base after graduation. The bands feature musicians from Dublin, Carlow, Wexford, Kilkenny and of course Waterford. I'm constantly blown away by the raw talent displayed by the students on the BA Music course, but these three bands have distilled that talent  into something powerful. It's going to be a savage night".
Anna-Liese tick all the indie-rock boxes. They've recently completed and Irish tour promoting their second EP 'Stand on My  Own', and it's been receiving rave reviews. These boys excel at guitar driven melodic rock and have firmly established themselves as an energetic force on the Irish original music scene. All four members of the band are graduates of the BA Music course.
Backroad Smokers Club have made it their mission to take down the corporate elite with smooth grooves and funky jams. If you've witnessed one of their performances, you'd have to think that they're in with a shot. These Psychedelic funk rockers have already made a name for themselves at Electric Picnic, Body&Soul, Fuinneamh and Lúnasa festivals. If you don't like funk and you don't like fun, you won't like these folk. Killian and Cal from the band are currently studying music at WIT.
Little Waits are a modern experimental band that create a unique sound with complex melodies, chord progressions and rhythmic grooves with a throbbing jazz influences. These boys have serious chops, prepare to have your mind blown. They're currently finishing their first studio album, so catch 'em while you still can. Sean, Adam and Colm are graduates of the BA Music course.
The glue that will hold everything together on the night will be provided by David 'Decks' Power who will be spinning tunes before, between and until everyone gets fired out of Central Arts in the early hours of the morning. David is a third year music student at WIT/Superstar DJ. Tickets are a fiver on the door, proceedings kick off at 10PM on Thursday October 19th and it's a BYOB event, so bring your own booze, buzz and buddies. Dress code for the night is dancing shoes.
For more 30 Years of Music Celebration details visit -https://www.wit.ie/witmusicat30 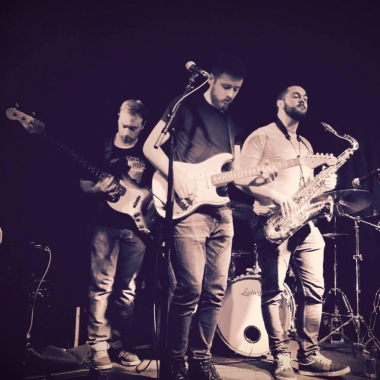