As one of the most highly regarded postgraduate filmmaking courses in the country, Nemeton TV and Waterford Institute of Technology’s (WIT) Higher Diploma in Television and Digital Media Production are accepting final round applications.

The course is ran by WIT, Nemeton TV which is one of Ireland’s leading production companies and Údarás na Gaeltachta.

Graduates of this course have found exceptional employment including companies and stations such as; TG4, BBC, Setanta, RTE, Nemeton TV and Red Show Productions.

Course Leader, Moira Sweeney said, “With the rapid changes in the media, the Higher Diploma  equips graduates with the requisite skills and abilities to work at the cutting edge in production in the television and digital media industries in Ireland. The continued growth of the audio-visual industry in Ireland requires skilled personnel. There is an identifiable shortage of trained producers, directors and editors in the industry. The personnel trained on this course enter an industry that is creatively and financially buoyant and where their skills and talent are highly valued. 80% of graduates from the Higher Diploma in Television attain immediate work in the television, advertising and digital media industries in Ireland. A further 20% use their newly acquired media skills in the hospitality, music, radio and print industries.”

Films produced on the course have gone on to win Best Irish Language documentary at the National Student Media Awards every year since 2014 as well as having been broadcasted on TG4 and screened at Film Festivals around Ireland.

A practical and hands on approach is at the core of the Higher Diploma with the course based in the busy TV Production Company Nemeton TV in Gaeltacht na Rinne. The lecturers on this course include industry professionals with broadcasting credits as directors, producers and editors for RTE, TG4, BBC and Channel 4.

Graduate TV Producer now employed by Tyrone Productions, Rebecca Speir said, “The Ard Diploma provided me with a fantastic practical introduction into the real world of TV, as it was at Nemeton TV itself – a working production company!”

CEO of Nemeton TV Production Company Irial Mac Murchu said, “By doing this course students can double the employment chances of finding work in Irish broadcasting by being able to work in the two main broadcasting languages, Irish and English. Students have found employment with Adorama, one of the world’s biggest retailers of photography gear. Other graduates have found work with AIB, creating original content around the All-Ireland Club Finals, #TheToughest and Electric Ireland. They have also created content around the All Ireland GAA Minor Championships #ThisIsMajor and The Guinness Hurling Bootcamp on TV3.” 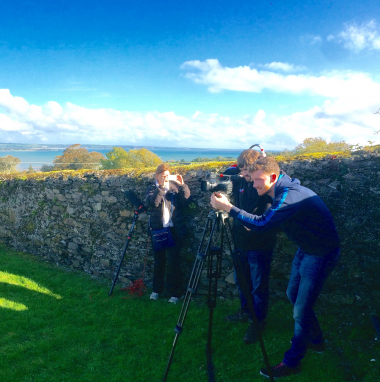 Student on a film shoot