"This night really was about acknowledging all the students who received scholarships throughout 2015/2016," WIT Sport Scholarship Co-Ordinator, Alan Malone said.

On the night, 58 WIT students were presented with certificates across 12 different sporting fields and administration.

Each student had the chance to be awarded with a Gold, Silver, Bronze or Sports Recognition Award.

Sports Scholarships at WIT are part funded by organisations such as Munster GAA and the Gaelic Players Association (GPA).

The winner of the brand new Athlete of the Year award went to second year Sport Coaching and Performance student, Michael O’ Loughlin, who received a trophy and certificate on the night.

Speaking at the event, Limerick boxer Andy Lee encouraged the athletes to believe in their abilities, which combined with hard work, makes anything possible.

On the night, sports coaches and family members were also in attendance.

The awards presented on the night were categorised from Gold to Bronze, as well as a Sports Recognition Award,which is dependent on their contribution to the WIT club they play with. 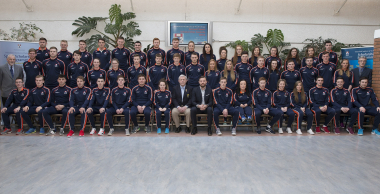