Huge congratulations are due to the Waterford Institute of Technology Ladies Basketball Team who won the Women's "A" Intervarsity title for the first time in our sporting history last weekend in Galway. After a grueling three-day schedule in the competition which was hosted by NUI Galway, the WIT girls fought off defending champions Trinity College Dublin in the final and ended up winners by 24 points after a final scoreline that read 68-44 in favour of WIT.

This historic intervarsity title was a massive effort by the whole squad; to win five tough games over a three day period is no mean feat and WIT's class came to the fore over the 3 days. On Friday WIT got the better of hosts NUIG 47 - 36 and later that day the girls overcame Dublin IT 51 - 45 in what was a very tight encounter. The team winning run continued into Saturday as the girls fought off UCD 54 -32 which progressed them to the semi-final against Munster rivals Cork IT, who WIT had beaten in the recent Division 1 League Final. On a winning streak WIT defeated CIT 70 - 56  in the semi-final and qualified for the National Intervarsities Final against reigning champions Trinity. In a one sided final WIT ended up comfortable winners and their strength in offence and defence stood them in good stead throughout the final.

Joyous celebrations followed the final hooter at the end of the final as the realization of the teams achievement surged through the team; this intervarsity title ensured a unique and historic double for the team following their recent league final victory over Cork IT in the All Ireland Colleges "A" Division Final. This was another first for the college and shows the standard of ladies basketball player currently enrolled in the Institute.

Coach Jim Dudley, in his first year with the WIT team, has done a superb job with this group of players and deserves great credit as do the club's committee led by Michael Evans who have done done a lot of good work in the background. The players, led by MVP Jazmen Boone, have been inspiring ambassadors for the college this season and their commitment and excellence on and off the court ensured this season brought unprecedented glory for WIT on the basketball court. The team have defeated all the major colleges over the course of the season in both the league and intervarsity competitions; UCD, UCC, NUIG, UL, Trinity College and everyone in between and the success is testament to all the talent and hard work available to the squad this season. 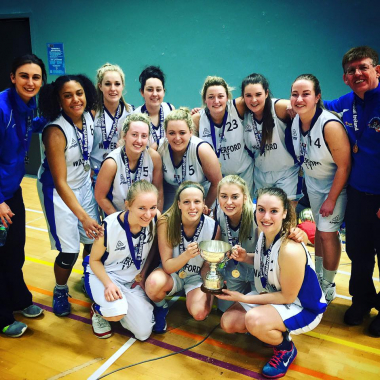