Kathlyn Leahy, a 2nd year student on the BA (Hons) Hospitality Management was the 2017 winner of the Ireland Skills Restaurant Service competition held at Dublin Institute of Technology.

Kathlyn was required to undertake three modules in service skills at bar, banquet and fine dining service over a two full days.

Competing against students from Shannon College of Hotel Management, Letterkenny IT, DIT and GMIT Kathlyn finished on top by the tightest of margins 0.79% with her fellow competitor from Shannon, who will also receive the Department of Education and Skills silver medal.

Kathlyn previously won Silver Medal at the Chef Ireland Cook Serve competition at Catex 2017. and also has a silver in the Cocktail competion. 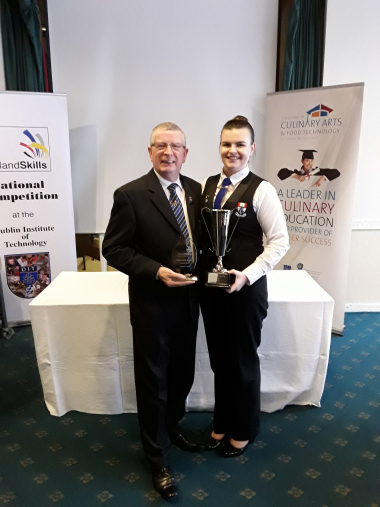 Pictured are Kathlyn and Head of Department, Ray Cullen