“A Gardener’s Look” portrait of Una McDermott presented to WIT

A portrait of the late Una McDermott was unveiled at a ceremony at Waterford Institute of Technology (WIT) recently.

The portrait was donated to the institute and is now homed aptly (because of Una’s love of knowledge) in the foyer of the Luke Wadding Library on WIT’s Cork Road Campus. “A Gardener’s Look” depicts Una at work in the War Memorial Park in Islandbridge, Dublin where she was previously OPW Head Gardener  The painting, by the artist Aidan Mc Dermott, Una’s brother, was the Open Award Winner at the Arnotts National Portrait Award Exhibition 1992.

Una, a horticulturalist and course leader of the BSc in Horticulture (National Botanic Gardens) joined WIT in 2001 where she worked until her untimely passing in March 2018. The ceremony was held on her birthday, and there to remember Una were scores of colleagues, students, friends and family.

Time out to remember

Opening the event Head of School (Dean) of Science & Computing, Dr Peter McLoughlin welcomed Una’s family to WIT and for being there to remember Una with the WIT community.

“Today is about taking time out to remember and celebrate the enormous and lasting impression which our friend and colleague Una had on all of our lives,” he said.

Peter added that Una’s life was a celebration of curiosity and reflected her love of knowledge in many areas. “I think therefore that Una’s presence here as gatekeeper to the library is particularly appropriate,” he said.

Head of the Department of Science Dr Orla O’Donovan gave details of Una’s path to WIT with those gathered, and shared anecdotes on her passion for academic quality.

Una had trained as a horticulturist originally in the National Botanic Gardens (1980-82) and subsequently worked in many horticultural posts/roles (1982 – 1992) culminating as OPW Head Gardener of the War Memorial Park at Islandbridge.

Una then returned to college and was awarded a BSc in Ag Science (Land, Horticulture) in 1996 from UCD. Orla gave the example of how Una did her final year project on the Lutyens/Jekyll Garden on Lambay Island, under the supervision of Prof Mary Forest from UCD. “Mary has said that it remains one of the best projects she has ever read and indeed it won the Irish Landscape Institute student design award,” said Orla.

The year after her degree Una attained a distinction in the MA in Museum Studies from the University of Newcastle upon Tyne (1997). “Her chosen specialism was Education and her thesis was ‘Developing an Educational programme for the National Botanic Gardens in Dublin – factors to consider’.” Following this she went on to work with Dúchas the Heritage service and for a brief time in Teagasc Kildalton College before joining WIT in 2001.

“She was tasked with the establishment and development of the BSc in Horticulture here in WIT with co-delivery with Teagasc in both Kildalton College. Later she established the parallel programme between WIT and the National Botanical Gardens in Dublin. She was programme leader for these two programmes and no mean feat co-ordination of three organisations in the delivery of this Horticulture programme,” added Orla.

Orla also highlighted how supportive Una was for the adult learner, most likely as she herself was an adult learner in UCD. “She would support her students in whatever way she could but wanted to ensure that there was always academic rigour in the system,” Orla added.

Una’s brother Aidan, who painted “A Gardener’s Look”, explained the inspiration for and the composition of the painting to those in attendance.

“Having on many occasions listened to Una’s accounts of the challenges she faced in reclaiming this garden and the Memorial, I decided that a female head gardener was a fitting subject matter for a portrait competition.

Details of the painting

“The painting is a composite of elements drawing on Una’s experiences of her work in Memorial Park with an underline narrative of order versus chaos, light versus dark. In the top right hand corner you can see a small aspect of one of the Book Rooms, while to the left we have representation of a contemporary flat complex. Underneath this we have a glue sniffer using a paper bag and two drunks fighting amongst themselves to the left of the painting. At Una’s feet there is a box of plants with a black memorial ribbon attached to a label that reads Rosa Banksiae Normalis. This is a reference to the roses and is also a nod in the direction of the wife of Sir Joseph Banks (himself an 18th century Naturalist, Botanist, patron of the natural sciences, voyager and plant collector with Captain Cook and advisor to King George III on the Royal Botanical Gardens, Kew.)  The Latin word Normalis is used as a play on the concept of what’s normal in this garden. The cards numbered 2, 5 and 7 of spades refer to the Victorian children’s book by Lewis Carroll “Alice’s Adventures in Wonderland” (chapter eight) where the cards are painting the white roses red because the red queen hates white roses. It also refers to the English war of the roses between the house of Lancaster (red rose) and the House of York (white Rose). Dogs were regular visitors to the park and Una would affectionately call them mutts. I have represented one such character tearing apart a book of nursery rhymes with scarps of humpty dumpty and the dish and the spoon scattered on the ground. The white roses are padlocked in a cage for their own protection from theft.  As a last resort the head gardener phones for back up using the precursor of the mobile phone more commonly known as the brick which she carries with her at all times while working in the Memorial Park.  The head gardener takes up the central role in the painting dressed in her gardening attire both as surveyor and maintainer of order in the garden. No mean task at the time.”

Some words from her sisters

Una’s sisters were the next to reminisce about Una. Patricia Billett spoke of the journey to get the painting to WIT and the collaborative effort between Teagasc and WIT staff to get it to Waterford and find a fitting place for it.

Patricia thanked all those in WIT, Kildalton, Teagasc and the Botanic Gardens who shared condolences and many stories of Una's life with her family. She finished with a few words especially for “the students past and present who helped us to realise the impact she had on their studies and life decisions. Because for Una the students were the heart of her work.”

Her sister Eva Creely commented on the impact of Una’s passing. “The past few months have been difficult both in the suddenness of Una’s passing and the circumstances surrounding it, which were publicly highlighted by us - not in order to take the spotlight- which was definitely not Una's way -but to bring attention to the way in which a public service is being delivered.  This is very much in line with Una's approach to work and life which was based on delivering public service to the highest standards and in a collaborative way.

Looking to the future, she noted that one of the first documents her family found in Una’s study was “the National Skills Framework from 2017 with her notes on how Horticulture should be considered in its own right because of the potential contribution it could make to the national economy.”

He referred to Una’s commitment and energy and also spoke of how Una was so proud of graduation day and seeing so many mature students step up and receive an award.

“I am delighted and honoured on behalf of the Institute to accept such a wonderful painting,” he concluded. 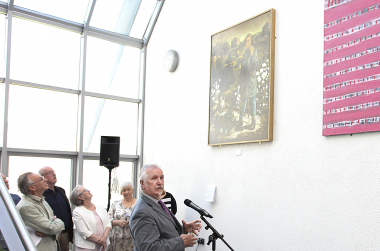 The painting to the left, by the artist Aidan Mc Dermott, Una’s brother (pictured centre), was the Open Award Winner at the Arnotts National Portrait Award Exhibition 1992.