2018 has been a great year for the students of Waterford Institute of Technology’s Higher Diploma in Television and Digital Media Production. Based at Nemeton TV in Gaeltacht na nDéise in Co Waterford, the students premiered an array of imaginative dramas and documentaries in the SGC in Dungarvan and they will feature at this year’s Strings and Things Festival in Clashmore over the June Bank Holiday.

One day in particular in April was very lucky for both students and graduates of Waterford Institute of Technology’s (WIT) Higher Diploma in Television and Digital Media Production.

Based at Nemeton TV in Gaeltacht na nDéise in Co Waterford, the students of 2018 premiered an array of imaginative dramas and documentaries at the SGC Cinema in Dungarvan to family, friends and locals.

And on the same evening, graduates from last year’s course dominated the Student Media Awards Category for Best TV Production of Documentary or Drama in Irish.

This year the work of nine students was recognized as being of the highest quality with the films offering a fascinating and wide range of stories. The winner, ‘An Lá a Thit an Condor’ was directed by Nial Kenny and co-edited with Allister Higgens and is an evocative blend of reconstruction and archive, with the filmmaker’s grandfather recalling the day eight German pilots landed in Nenagh during WW2.

Following in the footsteps of former graduates of the course, this year’s young group of filmmakers will also hope to win awards and have their work broadcast on TV and screened at some of Ireland’s best film festivals. And most importantly, they can look forward to employment in a vibrant industry that needs their skill set. The class of 2017 are working in production companies around the country as well as in the related digital media industries.

Oisin Mistéil a young Dublin writer and director was inspired to write his second drama Amach an Sliabh while walking in the Comeragh Mountains in Co Waterford. The stunning background of the majestic lake of Coumshingaun became the perfect location and centerpiece-piece for his film.  Moving from Dublin to An Rinn, Co Waterford to complete the Postgraduate in Television and Digital Media Production with Nemeton TV and Waterford Institute of Technology was a great step for Oisín Mistéil to take.  The course has given him the opportunity to hone his skills and gain experience in every step of the production process, from writing and storytelling, to producing, filming, editing and marketing.

Seán Ó Ciardha from Dublin presents and directs his first short documentary ‘Faoin gCeann Tuí’, a remarkable story of how a visit by a BBC television crew to the filmmaker’s ancestral home in Conamara

in the 1960’s impacted the lives of a generation of his family and local people.  As Mártan tells us in the film  ‘We had never even seen a Television in our lives … it was like we were starring in a Cowboy movie or something’.

Natália Uí Fhaoláin a Brazilian native and Irish speaker, Natália explores what it means to find a home away from home in her short film ‘Ón Rinn go Reykjavik’. In the film, we hear from two women who exchanged their native homes for very different places, cultures and languages. Natália meets with An Rinn native Sibéal Turraoin, who now lives in Iceland and explores what similarities and differences they share on their unlikely journeys.

Áine Ryan of the well known ‘Jim the Mill’ family from Upperchurch, Co Tipperary, has written a beautiful children’s short drama  Feadóg/Whistle.  The film tells the story of a magic tin whistle and a  young boy called  Eoin who is obsessed with playing it. This short film is another string in Áine’s bow as her quirky dramas have already gained her great critical acclaim, including five star reviews at the Edinburgh Fringe Festival.

Longford native Damien McManus’s passion for writing comes across strongly in his first short documentary ‘O Mheabhair go Méar/ From Mind to Pen which delves into the mysteries of writing.   Does writing have a healing benefit and is it an alternative medicine to counteract depression? Personal stories from three inspiring Déise women with diverse views on life and writing's input on their lives.

Step by step, the students are equipped with the necessary skills needed to not only complete their projects but to learn about all aspects of the media industry.  This year, they have yet again benefited from inspirational master classes, with visits from some of the best in the industry here in Ireland: Directors Paula Kehoe and Paddy Hayes, Fair City Actress Carrie Crowley and Peaky Blinders Director of Photography Cathal Watters.

This Postgraduate Course In Television & Digital Media Production is run by the Waterford Institute of Technology in association Nemeton TV, one of Ireland’s leading production companies, and Udarás na Gaeltachta.  This course is widely regarded as the most industry-focused course in the media sector. The core belief is that third level course is relevant, dynamic and genuinely prepare students for industry. The course has gained a high profile in the media industry and has an excellent employment record among course graduates.  Films produced on the course have gone on to win Best Irish Language documentary at the National Student Media Awards every year since 2014. 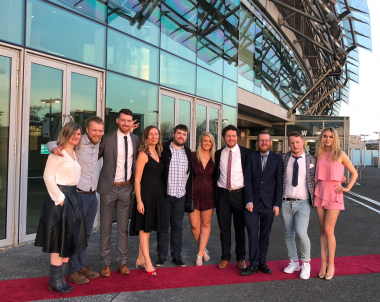 On the red carpet at the Student Media Awards