Recognition of student effort and excellence is something the School of Business continually does. These top performing students can influence others to achieve their potential as peer role models, and the recognition represents a mark of excellence to be included in recipient’s curriculum vitae.

The awards were called by the course leaders and presented by the Head of School (Dean) of Business, Dr Thomas O'Toole.

In a speech he said: "The students on the Dean's list are among the highest achievers nationally and internationally. Their quest for academic excellence is underpinned by their commitment and enthusiasm for their programme of study and bodes well for their future careers."

The following are the Awards presented on the day.

The Rowe Medal is in memory of the founding Head of School, it presented to the best performing undergraduate student. The Rowe Medal was presented by Dr. Mark Rowe, to Conor Duff whose overall result was highest across the School. Conor is registered on the Bachelor (Hons) in Accounting

The Graduate of the Year Award is presented to the best performing graduate. The Graduate of the Year was presented by Dr. Thomas O’Toole to Noel Whelan who completed the BA in Accounting. His award follows previous success at the awards including: PWC Scholarship winner 2017, CIMA Award 2017, Dean’s List 2017/2018, Rowe Medal 2018, CPA Award 2018.

This award was presented by Dr. Tom O’Toole, Head of School of Business. The International Student of the Year Overall Award was presented to the students whose overall result was the highest across the school.

The award was presented by Dr. Thomas O’Toole to Yi Xuan Per who is studying the BA (Hons) in Accounting.

The International Student Highly commended award goes to International students whose overall result is over 70%. The award went to Oleksandr Slyvchuk who is studying the Higher Certificate in Business.

This Award was presented by Ms. Linda O Kane on behalf of the combined Credit Unions in Waterford to Dean O Mahony who is studying the Bachelor of Business (Hons).

This award was presented by CIMA representative Mr Ray Ryan. It was presented to the student with the best Management Accounting result for Bachelor of Business (Honours) and BA (Honours) in Accounting.  The recipients were Eimear O Dwyer studying the BA (Hons) in Accounting and a past pupil of Scoil Mhuire, Carrick on Suir, Co. Tipperary and Colm Kirby studying Bachelor of Business (Hons) and a past pupil of De La Salle College, Waterford. 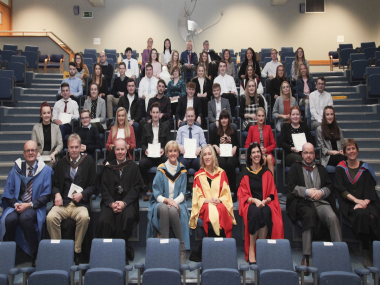