Access to Justice: identifying the problems, finding the solutions

Waterford Institute of Technology and the AFCC (Association of Family and Conciliation Courts co-hosted a Family Justice Seminar which took place on Monday 18 April at the Dublin Dispute Resolution Centre.

Speaking at a gathering of international judges and family law specialists Dr Roisin O’Shea said, “With the ongoing impact of austerity measures, for many people going to court is simply not an option. Despite many years of calls for reform from all quarters, litigating a family dispute in court still takes too long, costs too much, there is no certainty of outcome and enforcement is a serious issue. Equally, financial constraints on State resources, have further impacted on the functioning of the courts, and we now need realistic options to ensure the best use of available resources,”

The former Irish Research Council scholar and WIT researcher Dr Roisin O’Shea, welcomed the opportunity to highlight the access to justice issues that impact on families who are in conflict post the break-down of the marriage or relationship. “Access to justice does not necessarily mean access to a court of law. It should mean timely, affordable and accessible access to appropriate services, designed to support the well-being of families and their children, post the break-down of the family”.

The family justice seminar, attended by solicitors, barristers, mediators, mental health practitioners, judges and academics, is an initiative of Dr Roisin O’Shea, researcher and Partner at Arc Mediation, and Katherine Irwin, family law specialist and Partner at Beauchamps law firm. The seminar, co-hosted by WIT, introduced the international, inter-disciplinary, vision of the Association of Family and Conciliation Courts (AFCC), an international professional membership association dedicated to improving the lives of children and families through constructive resolution of family conflict, focusing on research, practice and policy initiatives. AFCC members have been at the forefront of developing interdisciplinary initiatives to better meet the needs of families in the justice system since 1963.

Current AFCC President, Judge Peter Boshier spoke of the need to encourage debate and discussion about access to family law justice in a rapidly changing world, “Access to justice is about as big an issue as there can be. It underpins our constitutional rights and obligations and is a measure of our success and offers appropriate access to justice: whether those most vulnerable are being protected easily and promptly; whether reasonably functional adults who are in conflict can be assisted to resolve that efficiently and in a way that is user friendly and understandable; and whether in those high conflict cases we are able to intervene speedily and make decisions—at a judicial level if required—which are authoritative, enforceable and which enhance the rights of children and their parents”.

David Hodson, Partner of the International Family Law Group, noted the slow development and uptake of ADR, despite having a long history of at least 50 years. “Chief amongst the reasons for the lack of growth of ADR has been resistance from some lawyers; partly through self-interest, partly through ignorance, partly through innate conservatism. Another primary reason for the lack of growth has been ignorance of the public, despite many countries running very expensive public information programmes”. Indicating that the role of ADR has now moved centre stage, he said “In the past eight years or so the world has had major public austerity, greater in some countries than elsewhere. ADR has moved from being a preferred option to a matter of dire necessity, both for the parties themselves, and for governments.” David Hodson was awarded an OBE in 2014 for services to international family law.

Speaking on the access to justice issues created by economic disparity, Dr Sinead Conneely of WIT said “Effective affordable access to justice, underpins the notion that we are all bound by, and subject to, the laws of the State. One person’s superior economic advantage should not ensure that they attain greater access to justice. We need to provide appropriate dispute resolution supports for all, such as mediation, with court being the last option rather than the first.”

A key finding from the project is that when both parents engage in mediation they reach agreement in over 90% of the cases. In 70% of cases all issues were resolved and agreements entered into.

“I have been privileged to be involved in the Family Justice Mediation Pilot in Kilkenny. The opening up of deadlocked cases has been truly remarkable, using the solutions-based approach to achieving agreement”, said Katherine Irwin, Beauchamps.

Collectively the speakers at the Access to Justice Seminar set out their vision for a family justice system; ideally a system with international cohesion, providing fast access to appropriate supports, including mediation and other ADR, available in the Community and responding holistically to the complex emotional dynamics and needs of families in conflict. 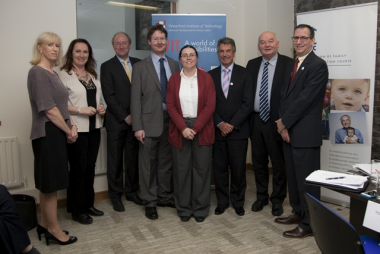