Aleksandra Wisniewska, from New Ross, Co Wexford and originally from Poland, graduated with a Bachelor of Arts (Honours) in Hospitality Management from WIT in 2019.

Speaking about starting her career, Aleksandra said, “Once my exams were finished, I moved to the south of France because I got a position as the restaurant assistant manager in a hotel called Château L'Hospitalet. Near the city of Narbonne.”

Aleksandra previously worked in Château L'Hospitalet as part of her work placement and credits her course for her current role.

“Château L'Hospitalet was actually my work placement and it was our course leader Dr Don O’Neill who helped me find the placement. We have work placement in third year so I went over for six months originally. I went back the following year to work over the summer and then after college I decided to move back again and that’s where I am now.”

Aleksandra gave advice for people considering doing the BA (Hons) in Hospitality Management. “I would definitely say to try to go abroad, especially for your work placement or maybe even for the summer and really focus on the language part of it.

“I know that people struggle with the language but it’s so important, improving my French helped me so much. When I first went to work in France, my French was very basic but because I worked and lived there, I am fluent in French now.

Get involved in college

Aleksandra went on to advise students to try new things in college, saying “I did competitions in college and our lecturers really encouraged that. I know its college and you want to have fun but it’s fun to do things with the college as well. They really help you and it helps with your CV as well”.

Aleksandra chose to study in WIT mainly because she wanted to study hospitality management. “My only other choice were Shannon or an international course in Dublin. This is the only one in the south east and it had really good content.”

The friends you make

Speaking on what stood out to her about studying in WIT Aleksandra said that it was probably her friends adding that “you make great friends and they are friends for life now.  I’m excited to be graduating, I’m proud that I did it, that I’m here after four years and able to graduate with my friends and enjoy it with my family.”

Interviewed by WIT student Killian Fitzgerald at the conferring ceremonies 2019 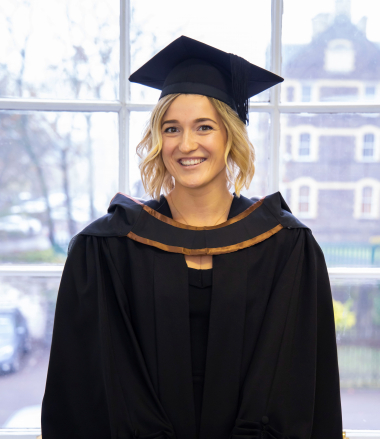