Sidhant Seth, a student of Global Financial Information Systems, was the overall winner after pitching his game: Warlcok – Battle of the Portfolios.

In preparation for the Enterprise Ireland Student Entrepreneur Awards, WIT held a Student Entrepreneurship Bootcamp in the ArcLabs Research and Innovation Centre in Carriganore Waterford which culminated in a pitch competition that saw Sidhant Seth win the first prize with his business idea: Warlock – Battle of the Portfolios

The bootcamp involved a series of workshops covering idea generation and protection, market discovery, business model canvassing, and design from WIT staff James O’Sullivan, Paul O’Leary, Ross Lee and Pat Lynch as well as Rosemary Ward from SEBIC. Students also heard from Keith McGrory of High Tower who was a WIT finalist in the 2016 awards.

The bootcamp culminated with a pitch competition where Kathryn Kiely, President of Waterford Chamber of Commerce and Ben Cronin, Kyckr were the judges. The ideas pitched were highly diverse and incredibly interesting giving the judges a real challenge to select the winner.

Dr Aisling O’Neill, manager of the ArcLabs Research and Innovation Centre highlighted how “supporting student entrepreneurship is key to building a thriving entrepreneurial economy in South East Ireland. We were delighted to host such a beneficial development opportunity for WIT students and look forward to increasing our level of activity in student entrepreneurship,” she said.

Sidhant Seth, a student of Global Financial Information Systems, was the overall winner after pitching his idea, the creation of a game: Warlcok – Battle of the Portfolios. The idea is to develop a Financial Market game for school and University students with interactive levels. This would enhance teaching through the game which showcases the story of a trader from Rags to Riches.

“The bootcamp was really very helpful as I learned so much throughout the two days from creating a business model to protecting a business idea…It should be organised every year”, commented Sidhant when asked for feedback on the bootcamp.

There were two runners up: Viktorija Vilcauskyte whose business idea is to create packaging out of seaweed as a sustainable alternative to current packaging solutions. Daniel Shoroye was also a runner up with his idea: TTT (Tomorrow’s Technology Today) Wear which involves integrating photovoltaic cells into clothing to allow people to generate energy from their own body heat.

The Enterprise Ireland Student Entrepreneur Awards competition deadline for submissions was March 8th and preliminary judging is underway. Best of luck to all WIT students who entered the competition. 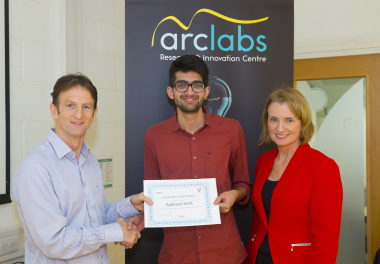