BA (Hons) Culinary Arts year 2 student, Derek McClelland was part of the winning pair that has won the inaugural Dairy Chef 2018 competition along with his partner on the day, Pierre-Louis Delacroix from Université de Cergy-Pontoise.

A total of 10 culinary students (5 from France and 5 from Ireland) were selected to take part in the 2018 finale of Dairy Chef. This competition was organised in a partnership between the Embassy of France in Dublin, Dublin Institute of Technology (DIT), the National Dairy Council (NDC) and the French Dairy Council (Cniel). Culinary students from top colleges in France and Ireland were invited to champion their institution by creating a three-course menu celebrating Irish and/or French dairy produce. Each dish had to include dairy as the main ingredient.

The cook-off event was held on Good France Day (Goût de France) on 21st March at DIT, Cathal Brugha Street. For the finale, each Franco-Irish pair of students was given a mystery basket of ingredients and asked to produce a three-course meal of their choice with dairy produce included in each course.

The judging panel for the competition was composed of H.E Mr Stephane Crouzat, Ambassador of France to Ireland, chef Ross Lewis of Chapter One, chef Guillaume Lebrun from Restaurant Patrick Guilbaud and Ms Cathy Curran of the National Dairy Council.

Derek’s prize is a week-long “stage” within the prestigious kitchen of the Ministry for Europe and Foreign Affairs in Paris, France followed by a weekend of travel to experience the best of French gastronomic culture.

Following the event, the French Ambassador to Ireland, H.E. Stéphane Crouzat said, ‘France and Ireland share a passion for good food, quality produce and hospitality. This first Dairy Chef challenge highlighted the depth of relations between culinary arts, tourism and hospitality schools from our two countries with young talented chefs taking part in a high-level competition. This contest illustrates the efficient work done by members of the France-Ireland network for Culinary Arts, Hospitality and Tourism in connecting French and Irish students with learning and training opportunities which will be of use in their future career’.

Lecturer in Culinary Arts at WIT, Edward Hayden accompanied Derek to the event and commented that "the work carried out by Derek and Pierre, during the competition, was a tour de force of culinary ingenuity and I feel that their level of team work, attention to detail together with their respective culinary prowess, was their most effective weapon in the competition as they worked collaboratively on each dish and it's individual components. They should both be very proud of themselves as they discharged their duties to the highest standard, exercising the best practices of hygiene, creativity, unity, competitive collegiality and gastronomic engagement to best represent both themselves and their respective institutes of education."

He continued: "The standard of the competition was very high with each of the teams working very hard to create a range of dishes, to impress the judges, from a very comprehensive yet challenging mystery basket. From a judging prospective great emphasis was placed not only on the use of ingredients, plate presentation and cookery practices but also on the taste and the suitability of the suite of flavours evident in each dish. On the day of the competition watching our own team, and indeed the other competing teams, I was confident that their future, and that of the culinary industry, was indeed bright and safe as this new brigade of chefs made stridently progressive advances in their career."

Derek, delighted with his win said that "winning the Dairy Chef 2018 was a huge achievement for me personally and for my career. I’ve worked hard over the last 3 years to get myself to the position I’m in now, hearing my name being called out was a relief and I was overcome with happiness and excitement. I couldn’t have done it without the continued education and support from my lectures at WIT, my current head chef Keith Boyle and of course my French partner on the day, Pierre. I’m very excited for my internship within the kitchens of the Ministry for Europe and Foreign affairs in Paris." 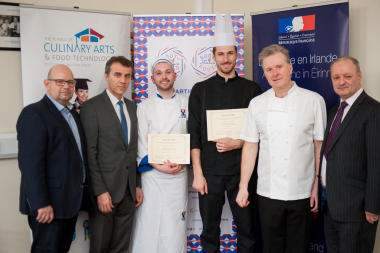