From football to graphic design

From football to graphic design, WIT graduate Paul Devereux speaks about his journey through college and landing a full time job straight from college

Paul Devereux, graduate of the BA (Hons) Design in Visual Communications landed his first full-time job as graphic designer with AKGraphics the same day he received his graduating results from Waterford Institute of Technology (WIT).

Former Enniscorthy CBS student Paul graduated from WIT in 2016 and said, “I always had a keen interest in the aesthetics of art and design so going on to do this course was a no-brainer for me. In this course, the one-on-one time you get with the lecturers is invaluable as each individual lecturer has their own advice and experiences to share.”

Prior to starting college, Paul was an avid footballer and played with his local team, Wexford and Leinster before signing with St Joseph’s Boys in Dublin where he played for Ireland on a number of occasions. Due to an illness, Paul’s football career was cut short and so he had to find something else he was passionate about.

The journey for Paul  began with AK Graphics when he submitted an application form for a job as graphic designer with the company. The company made contact with him after his lecturer Cordula Hansen highly recommended him for the position.

“The experience of working in a real design studio setting has been a great learning curve and I have to thank WIT for preparing me for this job. So far, I have had the opportunity to work on some really exciting projects for some prestigious clients, from both home and abroad.”

Creative Director at AKGraphics Anne Kelly, employed Paul and was thoroughly impressed by WIT’s most recent graduate, “We are delighted with the standard of the graphic design students coming out from WIT. We employed Paul in 2016 directly from college, and he is still working with us, and is blossoming in graphic design.”

This is a four-year degree course, which prepares students for employment in the advertising and design area.

The degree has been designed to be innovative, consisting of studio practice, design history, marketing, legal and visual culture.  The practice-based elements of the course include graphic design/typography in print and design, illustration, together with printmaking, digital media and photography

Students who enrol in this course can expect to study modules such as; Photography, Illustration and Writing & Study Skills. 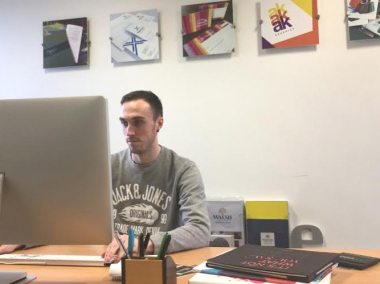