Jack Kennedy, a final year BA (Hons) Music student, was selected to perform solo at the Feis Ceoil Young Platform Series at the National Concert Hall this week. Jack is the current Feis Ceoil senior classical guitar winner. He competed against the top classical guitarists from Ireland and abroad to win this title. He was subsequently selected to perform in the National Concert Hall alongside some of the most outstanding Feis winners of 2018.

Jack also won the Bridget Doolan Memorial Award this year for his outstanding performance ability and contribution to music at WIT and the wider community. He is pictured with his teacher Dr Michael O’Toole who is a world-renowned classical guitarist.

Dr O’Toole has performed and recorded with some of the most prestigious musicians in the world including Phillip Glass, the National Symphony Orchestra, and RTE Concert Orchestra. He consistently produces high quality musicians including Jack Kennedy and James Mc Donald – a recent WIT graduate from the BA (Hons) Music programme who won the senior Bach category in the Feis Ceoil this year. This is an extremely difficult category and it is notable that a WIT music graduate won this competition. It is testament to the outstanding skill level of the musicians produced by Dr. Michael O’Toole each year at WIT. 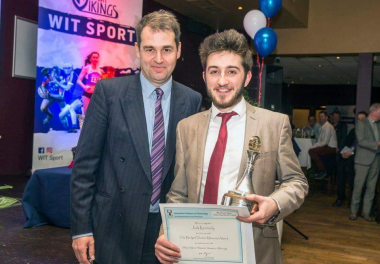