Career Paths in Music event explains the diversity of opportunities

On Saturday, 21 October, an information session was held at the College Street Campus of WIT, featuring five alumni of the WIT Music Degree recounting the paths that their careers have taken since leaving WIT. This was held as part of the 30 Years of Music celebrations.

The morning began with Waterford organist, choral director and educator David Forde who spoke of the various experiences and employment opportunities that lead to his current position of Deputy Principal at Carlow Institute of Further Education and Training. He spoke of the need to follow your passion which will always bring you satisfaction in your work.

David's presentation was followed by Waterford actor, singer and composer, Jamie Beamish. In very entertaining fashion, Jamie described the trials and tribulations of young actors trying to find work. He strongly emphasised that his training at WIT gave him an edge as a performer when auditioning for jobs. Again, he talked about the need to take chances in pursuit of your passion, and he now finds regular work in London's West End, in the Globe Theatre, and has appeared in film and on television, occasionally writing the music score for the film or television show.

Dublin French Horn player Brian Daly talked about his early experiences as a teenage dep in the National Symphony Orchestra and the breadth and depth of the degree course at WIT which he felt was far greater than that found in degrees in rival established colleges. Brian emphasised the need to go out and work hard, to look for business opportunities within music, and not to be afraid to try things.

After a break for coffee, composer Gráinne Mulvey took the floor. Gráinne described the Eureka moment while being taught by Dr Eric Sweeney, former course leader, when 'the pieces fell into place' and the possibility of composing became clear. She talked of the value of continuing to work as a teacher at DIT which allows her to keep pace with evolving technologies in the world of composition through the projects of her students.

The last speaker was Toner Quinn whose parents are heavily involved in writing and film. Toner's interest in pursuing a career in writing about music was sparked by his final year thesis. He subsequently completed a Masters Degree in publishing and journalism in Scotland and, when he returned to Dublin, he set up the Journal of Music in Ireland (JMI). Following a number of years in print, the JMI went electronic, increasing its readership by 1000% with readers spread around the globe. It was a fascinating morning which highlighted some of the possibilities and various career paths through a Music Degree from WIT.

Our sincere thanks to the wonderful speakers for their time and contribution to our celebration of 30 Years of Music at WIT.

Read about more career paths in music on the Stories tab on our BA (Hons) Music course page on the WIT website. 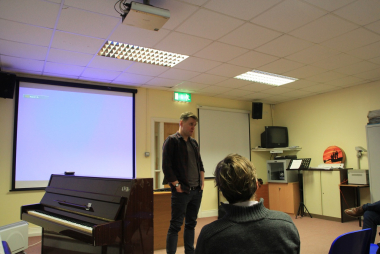