The Centre for Newfoundland and Labrador Studies at Waterford Institute of Technology were delighted to host a public lecture by Professor Jane Koustas which took place on Tuesday 14th June in the Luke Wadding Library.

The lecture title of the seminar was, “Robert Lepage`s The Blue Dragon: Quebec Identity? Go Reconfigure”

Dr Una Kealy, lecturer in Theatre Studies and English at WIT, described the lecture as “a valuable and insightful opportunity to reflect on how language operates both a means of identity construction but also identity fragmentation and how theatre in particular can exploit the complexities of identity in ways that appeal to the large parts of the brain that are non-text and language based. We have much to learn from Lepage as a theatre innovator and as one of the world’s foremost interrogators of identity.”

Professor Koustas is the co-editor of two books and has published numerous articles in journals such as The University of Toronto Quarterly, Quebec Studies and Theatre Research in Canada.  Professor Koustas has served on the jury of the Governor General’s Literary Awards, the Quebec Writers’ Federation Translation Award and the International Impac Dublin Literary Award.

Centre for Newfoundland and Labrador Studies 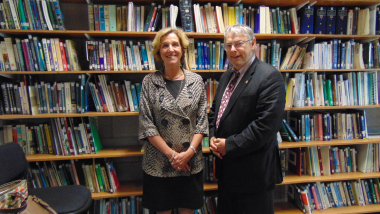 Professor Jane Koustas and John Maher at the public lecture hosted by the Centre for Newfoundland and Labrador studies and WIT.