Dr Peter McLoughlin, Head of School of Science and Computing stated that “the awards are very much a celebration of the innovation and creativity of our students and reflect the breath of engagement which the Department has with our partners”.

He congratulated all of the students for their hard work and commitment in their area of study and thanked all industry partners for their continued support. He finally acknowledged the work and dedication of the staff in the Department throughout the year.

Winning students are listed below

Ruaidhrí Bates was awarded the top prize for his project, “Role of epidermal growth factor signalling in breast cancer cell growth”, followed by Emily Quann with “Sex determination of the bank vole and wood mouse small mammal species predated upon by barn owls via molecular analysis” and Megan DeCourcey with “The microbiological impact of timelines and the evisceration process on bovine carcasses during the slaughtering process”.

The awards, kindly sponsored by Eurofins Scientific, honoured the best project presentations from final year-students in the Level 7 BSc in Applied Biology programme. John Calvo from Source BioScience presented the awards, with top prize going to Éire Brennan for her project “Isolation and characterisation of probiotic bacteria from kefir and sauerkraut”. Second place went to Jennifer Drohan for “The optimisation of Western blot transfer and detection”, and third to Kevin Foskin for “Detection, enumeration and identification of indicator organisms in water: a comparison of defined-substrate technology and traditional microbiological methods”. Sam Grace and his project “Random amplified polymorphic DNA profiling of Salmonella species” and Robert Jeanes and “Identification of moth species (Lepidoptera) by use of DNA barcoding” were also highly commended.

These awards are for the best Level 7 and Level 8 student undertaking an environmental research final year project in 2017-2018. The best student from each institute receives an award for their contribution to the environmental field in Ireland. The winners were Adam James from the BSc (Hons) in Molecular Biology with Biopharmaceutical Science programme at Level 8 for his project “Screening for antibiotic resistance genes in surface and urban water bodies”, and Niamh McDonnell from the BSc in Applied Biology programme at Level 7 for her project “Plant-growth promoting rhizobacteria and their ability to produce indole-3-acetic acid”.

Students of the BSc (Hons) in Pharmaceutical Science course Megan Quigley and Valeria Semenyaka were the winners of the Final Year Research Project Poster Award which was sponsored by Sanofi. Hilkiah Ako and Sophie Meehan were also finalists for the award. All the final year students were required to analyse and summarise their laboratory research work carried out over the semester and design, prepare and present a poster to staff and students. Each student presented a pitch and answered questions on their project by the assessing staff members at a poster session held on Friday May 17th. The standard of work demonstrated by all of the students was excellent this year. The winning students demonstrated exceptional oral presentation skills, ability to summarise their project and technical writing skills with detailed understanding of their projects. Brian Rellis from Sanofi presented the awards to the finalists and winners.

The recipient of the inaugural award for best final year project by a student of the BSc (Hons) in Physics for Modern Technology, sponsored by Bausch & Lomb, was Michael Cooke. Michael’s project, supervised by Dr Claire Lennon, involved the determination of radioactivity in air filters by high-resolution gamma-ray spectroscopy. The project was carried out in collaboration with the EPA. The award was presented by Kevin Fahy R&D manager at Bausch & Lomb.

Aoibhinn Dempsey has won the Food Science and Innovation award, kindly sponsored by Dawn Meats. During the year BSc (H) in Food Science and Innovation students develop a food product from initial design through to formulation, packaging and marketing, culminating in showcasing the finished product to industry. Aoibhinn developed The Lively Cow kefir ice cream. Having grown up on a dairy farm she wanted to add value to the family enterprise while incorporating her interest in digestive health. In manufacturing a kefir ice cream she combined the associated health benefits of kefir with the luxury of ice cream. In picking Aoibhinn, the judges praised the high quality of her product and her enthusiasm for her chosen product. Paul Nolan from Dawn Meats presented the award.

The award recognises the achievements of BSc (Hons) in Agricultural Science degree students with the best final year project presentations. The 2019 winners were Leanne Connell and Mark Reidy. The award helps students realise the relevance of their final year projects to a world beyond college. The bursary is very welcome in helping our students make the transition to the workplace following their studies. It also gives them an opportunity to excel and showcase their research to industry.

The awards were presented by Niall O’Hanlon and Pat Hernan from Dairymaster.

The winner of the AIB BSc (Hons) Land Management (Agriculture) award was Daniel Jack Montgomery (Wicklow) who investigated early rumen development in dairy calves and the role that diet plays in volatile fatty acid production in the animal.

Third prize went to John Walton (Kilkenny) who examined the effect of feeding calves whole milk alone or whole milk with an acidifier on calf performance and health.
Bryan Doocey from the AIB Agri-Sector team heard the presentations of the students who had been shortlisted from the class and he selected the ultimate winner and the two runners up for this award. Bryan commented on how impressed he was with the extremely high standard of work carried out by the students in WIT.

John McSweeney, AIB Branch Manager, The Quay, Waterford and Noelle Chambers from the WIT AIB branch were present on the day, and Noelle presented the award to the overall winner, Daniel Jack Montgomery.

BSc in Agriculture project poster award was sponsored by Comeragh Veterinary Practice. The students in their final year of this three year degree presented their poster which outlined their project findings. The awards were won by Declan Byrne whose project examined the cleanliness of animals on different types of housing floor types, and also by Aisling Jones whose work outlined the effect of breed, age and feeding regime had on the quality of colostrum in dairy cows. Dr Tony Woodcock, course leader of the BSc in Agriculture programme presented the award to Declan Byrne.

The Society of Irish Foresters is the professional body for foresters in Ireland. They award the Augustine Henry Memorial medal each year to the student that has produced outstanding work in the final year of the Bachelor of Science in Forestry. Augustine Henry is known as the father of Irish Forestry due to his involvement in setting up the state Forest Service and his position as Professor of Forestry in UCD. In addition to the memorial medal, the Society sponsor the winning student to participate on their annual international study tour. This year, the award was presented by Dr Ken Bucke, President of the Society of Irish Foresters, to Ronan O’Keeffe who will join the Society tour to Bosnia Herzegovina this September. 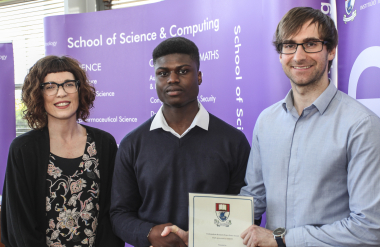 Pictured from left are: Dr Claire Lennon, WIT; Hilkiah Ako, a finalist in the BSc (Hons) in Pharmaceutical Science Final Year Research Project Poster Award sponsored by Sanofi and Brian Rellis from Sanofi presented the awards to the finalists and winners.