Certificate in Skills for Independent Living for people with intellectual disabilities

The Department of Nursing at Waterford Institute of Technology (WIT) held an end of year celebration to mark the completion of the first year of the Certificate in Skills for Independent Living (CSIL) this week.

The Department of Nursing at Waterford Institute of Technology (WIT) held an end of year celebration to mark the completion of the first year of the Certificate in Skills for Independent Living (CSIL) this week.

The programme takes a rights based approach to education for people with intellectual disabilities with emphasis on the full inclusion of students in college life amongst their peers. While academia is important, so too is a varied social life. With the support of student mentors, students on the CSIL have been actively involved in the various clubs and societies across WIT throughout the year.
According to Philip Crosbie, student on the CSIL at WIT:“I joined the WIT Athletics Club this year. I go to training on Tuesday nights. It’s good for my fitness and it’s also great fun. I’ve made lots of new friends. There’s a good bit of study to do as well.”

As part of the celebration, each student prepared and presented a poster of their education and learning as a first year student on the CSIL. There were also a number of oral presentations by students.
The programme, led by Ms Sinéad Foran in the Department of Nursing, and Ms Siobhan Flynn, Brother of Charity Services South East, was also supported by staff from a number of local services as well as lecturers from the Departments of Nursing, Maths and Computing, Sports, Health and Exercise and Applied Arts at WIT.

The programme is a two year programme, nationally accredited at FETAC Level 3. Thus far students have completed modules on Communications, Computer Literacy, Personal Effectiveness and Health and Fitness in year. Modules in second year include Career Planning, Maths and Numeracy.
For more information on the programme, contact the programme leader Ms Sinéad Foran 051 306187. 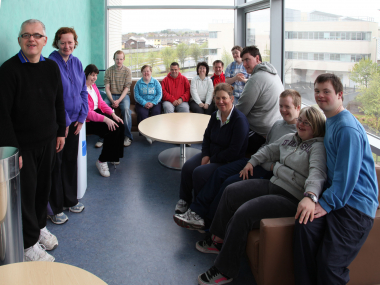