Challenge Science was developed to introduce primary school pupils to a world of discovery, and opportunities in science, engineering and technology

A programme that has seen 1,700 primary school pupils from across Waterford and south Kilkenny attend science workshops at Waterford Institute of Technology (WIT) since 2006 has marked 10 years of inspiring future scientists.

Organised by Junior Achievement Ireland (JAI), the annual Challenge Science event this year saw 150 children get hands-on in the labs at WIT as they conducted exciting experiments under the watchful eye of WIT, JAI and Genzyme personnel.

Challenge Science was developed to introduce primary school pupils to a world of discovery and to make them more aware of exciting study and career opportunities in Ireland’s thriving science, engineering and technology sectors. In Waterford, the programme is delivered at WIT in partnership with Genzyme. This year, 17 volunteers from the biopharmaceutical company’s Waterford campus led workshops over the two days. They took the number of volunteers from Genzyme to over 120 since the programme began 10 years ago.

To mark the 10-year anniversary, Genzyme hosted a celebration of the event, attended by Cllr John Cummins, Mayor of Waterford City & County along with some of the staff who had volunteered since 2006. In addition, some of the first young people to participate as primary schoolchildren and who are now pursuing science at third-level or – in one case – working at Genzyme, shared with the audience how their career paths have advanced towards science since attending the first Challenge Science in 2006.

Speaking at the event, Mayor Cummins said: “As we work to position Waterford as a hub in the thriving life sciences sector, it is really encouraging to see so much great work being done to promote an interest in science among children. Great credit is due to Junior Achievement Ireland, Genzyme and WIT for their teamwork on delivering ‘Challenge Science’ each year since 2006. The numbers involved are hugely impressive and underline the power of a good idea that’s executed well by people working together.”

Denise Power, Area Manager (South East), Junior Achievement Ireland said: “Little did we know when Challenge Science started in 2006 that it would still be flourishing 10 years later. In the meantime, 1,700 young people have had the opportunity to learn more about science and to explore WIT. As well as having great fun with their peers from other schools, the children really love the chance to do the various experiments with the Genzyme team and there’s no doubt that many of them will go on to build great careers in this field.”

Dr Michael Harrison, Head of the School of Science & Computing at WIT, added: “I am delighted to welcome Genzyme and the participating pupils to WIT for this year’s Challenge Science. Programmes of this type are very important as our next generation of scientists get the chance to experience hands-on science from an early age. These programmes give students the opportunity to experience our labs here in WIT in an exciting programme. I hope to welcome them back in a few years to study some of the many exciting science and computing degrees we have here in WIT. Working with industry allows us to work together to build the pipeline of students needed for the biotech and pharma industry which is going from strength to strength in the southeast.”

Paul Deegan, acting Head of Human Resources, Genzyme Waterford, said: “Challenge Science is one of our longest-standing community partnerships and it has been great to see the programme sustained and developed over the last 10 years – particularly as so many of our team have come on board as volunteers to deliver the workshops and classes at WIT. This all helps to tap into the natural curiosity that children have to know how things work and it’s really encouraging to know that we now have some of the first wave of participants from 10 years ago studying science at third-level and planning their careers in science.” 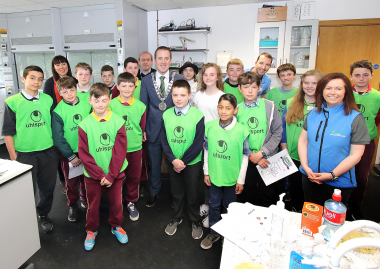 Mayor of Waterford City & County Council, Cllr.John Cummins pictured with students from St.Declan NS, Mount Sion NS and Waterford Educate Together in the labs of Waterford IT during last week’s Challenge Science event.