Over €500 was raised as from the School of Business charity soccer fundraiser held on Business Day in February.

“I would like to sincerely thank all my colleagues within the Business School and throughout the Institute for contributing so generously to this very worthwhile cause,” said Shane.

The game proved to be a fitting climax to the hugely successful Business Day organised by the WIT Business Society. This annual charity game is an initiative supported throughout the Institute by staff, students, management and members of the Business School and Business Society and has been a key event in developing a sense of collegiality and community awareness for all involved.

While the college hall was the scene of much hysteria and media attention on the day of the General Election count, all eyes were firmly fixed on it earlier that week for the week’s main event, the annual student lecturer fundraiser. With the lecturers having failed to win since Enda Kenny assumed office, the odds were firmly stacked in favour of the students.

Having expressed a strong interest in managing the team, Jurgen Klopp Morrissey assumed the mantle of manager this year with Louis van Treacy as his assistant.  Following a detailed tactical analysis by Klopp, van Treacy and sporting consultants Noel Connors and Dennis Harris, they decided on a 3-2-1 (Christmas tree formation or something like that) and it has to be said that it worked an absolute treat.

The game started at a frenetic pace with our sports nutritionist Stephen Barrett raiding dangerously down the left wing on numerous occasions. Stephen’s advice on pre-training and pre-match meals proved to be pivotal in terms of the team’s success. A couple of early goals from our main striker Richie Lyng and a sumptuous strike by marathon man Tony Quinlan laid the platform for the performance which followed. With our language guru Chris Mullhall marshalling the back 3 superbly and utilising all his linguistic and communication skills to talk his teammates through the game, our defence was rarely troubled.

A couple of more goals quickly followed from Richard Burke and with Anthony Burke and Gerry Arthurs pulling the strings in the middle of the field, the lecturers lead comfortably by 5-0 at half time. Indeed such was the level of Arthur’s performance as midfield general, it is strongly rumored that top Belgium clubs Anderlect and Club Brugge are looking for him to go for trials when he visits Belgium next week with the MBS Business students on their study tour.

Following the resumption of the game the manager worked the oracle and pulled of a tactical masterstroke by introducing a new target man up front in the guise of Chris O’ Riordan. A delicate lob by Chris over the goalkeeper followed which drew huge applause from the mass audience in attendance. Eamonn Dalton was in excellent form in goal and provided a sense of calmness for all his teammates. While we may struggle to see a consensus in Dail Eireann in the coming weeks, the result here was never in doubt here with Anthony Burke displaying some more mazy footwork to add a 7th before Tony and Richie Lyng completed the rout making it 9-1. 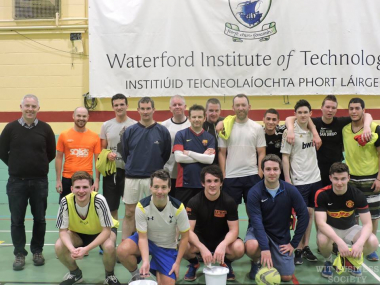