CIOB Student Challenge Ireland Award 2017 winners for the second year in a row!

The annual CIOB Student Challenge was held on Thursday the 10th of November at the Construction Industry Federation Offices in Ranelagh, Dublin.  As WIT held the title from last year, there was a key focus to retain the title this year.  A team of students from the Department of the Built Environment including Mark Sheridan, Anthony Browne, Conor Walsh and Jason Fitzgerald represented the Department this year.

The format included the teams being provided with a brief early in the morning and being asked to submit a written report by lunchtime.  Following this the students were required to make a presentation and answer questions from the judging panel in the afternoon.  The students were fantastic representatives for the Institute and were deemed winners again, retaining our title.

Michael Gallagher, Chair of the CIOB Eastern Hub coordinated the event with Dermot Carey of the CIF providing the venue/facilities and catering during the day.  Tom Parlon, Director General of the CIF provided a talk to the students on the day in relation to the future of the construction industry in Ireland and gave a fascinating insight into the developments about to commence.  The event was covered extensively for publication in upcoming CIF and CIOB publications.

Congratulations to the students and roll on preparations for next year when we seek the three in a row! 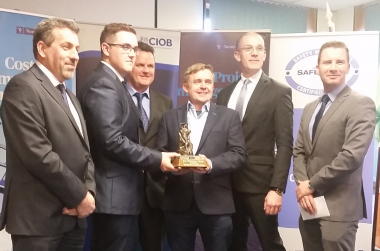