Julie was invited by Roger Childs, Head of Religious programming, to perform a broadcast of her 'Celebration Mass', a composition for Voices, Brass, Percussion and Organ. It was composed to celebrate her Dad's, Michael Quinlan, 50th anniversary in City of Waterford Brass in 2010. The offertory music titled 'My Gift' will feature Michael Quinlan, on Euphonium as soloist.

Both the band and choir are very honoured to be representing Waterford City for this very special event, particularly with the various anniversaries being celebrated this year for St Pauls' parish and City of Waterford Brass.

Julie, who is the co-ordinator of the Waterford Institute of Technology (WIT) Music School, is currently completing her postgraduate music composition studies at the Institute under the supervision of Dr. Marian Ingoldsby. It is indeed a huge honour for RTE to feature original compositions for broadcast and the band and choir are rehearsing twice weekly for the forthcoming performance. 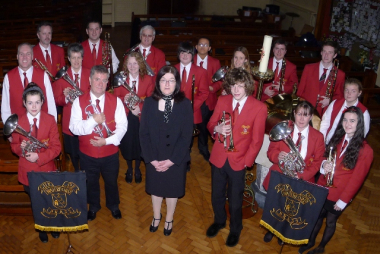 The City of Waterford Brass, with Musical Director Julie Quinlan