An overview of WIT’s Clubs & Societies week in full

Clubs & Societies are coming down from a busy week, from winning GAA and soccer teams to Law Week talks and the Photography society workshops

WIT ladies basketball team continued their great run of form with a tremendous victory away to old rivals University of Limerick (UL) last week on a 46-54 score line. DaLacy Anderson (Victory Scholar and WIT Wildcats star) led the scoring with an amazing 21 points to light up a grey day at the UL Arena. Five great wins now on the bounce for WIT Ladies who have an extremely daunting home semi-final against favourites DCU at WIT in two weeks’ time.An overview of WIT's Clubs & Societies week in full

The men’s basketball team were also playing a home fixture last Thursday against Dublin Business School (DBS). The team were victorious on a score line of 76-64. Both teams will be very positive heading towards the Inter-varsities in the coming months.

The WIT Badminton team had two home games last week in the WIT Arena. They took on CIT A & CIT B. WIT came out on top against CIT B beating them by 3 games to 2. WIT fought hard against CIT A but unfortunately could not overcome the tremendous attacking play from the away team and losing out on a tight score line of 2-3.

WIT Men’s Soccer teams were in action in their respective cup competitions last week. First up were our premier side that travelled to Dublin to face DIT in a daunting encounter. WIT flew out of the blocks and the inform Daniel Carroll netted twice for his Waterford side. WIT performed well throughout and showed real depth and strength in their squad with some key players missing the encounter. The game finished 2-0 in WIT’s favour and ensured a place in the next round of the cup.

Our division 3 side were drawn against Dunboyne in the Bob Eustace Cup at home in WIT Arena. WIT flew out of the blocks to race into a two goal lead. Their advantage was cut short just before half time when Dunboyne struck back twice to level matters. The second half saw WIT steam roll their opponents. WIT netted four times without reply to advance to the next round of the cup after a 6-2 victory.

WIT Ladies Soccer squad travelled to Galway on Monday 13th of February to take on a much fancied NUIG side. The girls were up against it from the off and NUIG struck four times to ensure that they qualified for the cup competition while WIT will compete in the shield competition in March for the ladies inter-varsity's.

The Men’s Premier Soccer team are also away this week as they travel to Newbridge on Wednesday to take on rivals Dundalk IT. This is a make or break game for both sides with both teams wanting to come out on top. The guys have trained hard the last few weeks for this game and will be hoping for a win. The game is due to kick off at 1:30pm.

WIT GAA club witnessed their Trench cup footballers overcome a strongly fancied Mary Immaculate side in WIT Arena last week. The old saying that ‘goals win matches’ was evident here as WIT struggled to kick a point but rattled the Mary I goal on three occasions in the first half to go three points up heading into the break. A Mary I onslaught was expected in the second half and they began to eat into WIT’s lead. There was an exchanging of points by both sides up until the final five minutes. WIT took advantage and kicked two magnificent points to seal victory and cement their place in the Trench cup weekend.

Last weekend the WIT Camogie girls travelled to The National Sports Campus at Abbotstown in Dublin for the 102nd Ashbourne Cup weekend. This prestigious competition saw twenty teams from across the country head to the capital to battle it out for the Ashbourne, Purcell and Fr. Meaghair Cups along with the Ashbourne shield, which made its return to the competition. Prior to the weekend, the girls had an excellent campaign, with wins over UCD and Mary I and while they were narrowly defeated by hot favourites UL  in round three of the competition, the girls certainly left no stone unturned in their preparation. Having won two out three games, the girls faced a quarter final with CIT, to which they won on a score-line of 3.14 to 1.7, thus setting up a semi-final meeting with UCC at 2pm on Friday last. Unfortunately, our girls fell short in this encounter and a one point win for UCC on the day meant this year’s campaign came to an end. It was UL who retained the Ashbourne Cup and made it two wins in three seasons when recovering from the concession of an early goal to record a victory over UCC on Sunday.

WIT GAA Club would like to both thank and wish all the girls the best of luck for the rest of the year, both in a sporting and indeed academic capacity. Their commitment and determination is certainly to be admired and it is no doubt that they will bounce back from this narrow defeat and do the College proud once again in next year’s competition. Finally, the club would like to thank manager Ann Downey and coach Paddy Mullally along with their selectors Jacqui O’Connor and Conor Phelan for all their hard work and effort throughout the year.

This week sees another busy week of sport with a number of teams lining out. First out to represent WIT will be the Men’s Rugby team that travel to Athlone to play in the quarter final of the cup at 3pm against tough opposition Athlone IT. Athlone IT have won this cup many times before so WIT will have a tough game on their hands if they want to progress to the semi-final.

This week in sport

Similar to last week, this week sees another busy one unfold for the WIT GAA Club. Today, the fresher’s hurler’s continue their championship campaign with an away game against CIT at 3pm. The fresher’s preparation has been geared towards this date and it’s all systems go for Tuesday. Richie Power of Carrickshock and Kilkenny fame has been a great addition to the management team this season for the fresher hurlers and his experience of big games should help team manager Pado O’Flynn and all the fresher hurlers majorly.

On Wednesday 15th at 2.30pm, the Senior Ladies Football team begin their championship campaign with a home fixture against Dundalk IT.  The girls have prepared well for this game and having won the league final against UUJ back in November, hopes of progressing through the Lynch Cup will be high for Kieran Maguire’s side. WIT will be back boned by Offaly’s ‘Player of the Decade’ Mairead Daly as well as key players such as Wexford’s Niamh Moore and Wicklow’s Aine Byrne.

The final championship encounter of the week sees WIT Men’s Football Team travel to the Connacht GAA Centre for this year’s Higher Education Championship Weekend. On Friday at 3.30pm, they take on a promising Marino side in the Trench Cup Semi Final, a fixture that is sure to be an enjoyable one. Preparations for this weekend have been good, with a quarter final win over Mary I on Wednesday last along with the boys reaching the All-Ireland Semi Final in this year’s league campaign. WIT have a youthful team led by Waterford’s Conor Murray and Shane Ryan up front with prominent players and leaders throughout the field who will be hoping to bounce back after last year’s narrow defeat to Dundalk IT in the Trench Cup Final.

Last week WIT Law & FLAC Society hosted Law Week with a number of events taking place. One of the main events that took place was the Eight Amendment Debate presented by WIT FLAC Society. The debate took place in the Auditorium on the Cork Road campus on Tuesday 7th February. The venue was full with over 200 students and family members in attendance. Dermot Keyes from the Munster Express was the moderator for the debate and had a number of guest speakers present such as Minister John Halligan, Cora Sherlock (Head of Pro Life Campaign) and John D. Walsh (Christian Democrat Politician).

WIT Photography club organised a number of successful workshops in the past few weeks such as camera phone photography, macro photography and drone photography. This week the club will be running a photo editing workshop to further enhance the clubs members’ knowledge in photography. 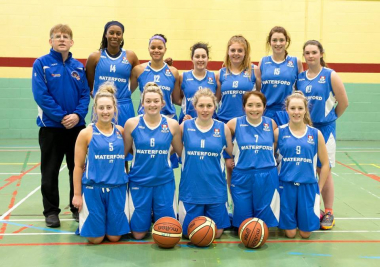