WIT students with films which have been featured in film festivals, graduated with honours from Television and Digital Media Production at NemetonTV

It was an exciting day at Waterford Institute of Technology as this year’s students from the Higher Diploma in Television and Digital Media Production at NemetonTV all graduated with honours. The work of ten students was recognized as being of the highest quality and since completing the course in May, the young filmmakers have been going from strength to strength.

Their films have been screened to great acclaim at festivals throughout the country including Guth Gafa, Kerry Film Festival and Fingal Film Festival. And now, following in the accomplished footsteps of previous graduates from the course, their films are due for broadcast on TG4.

Benefiting from a hands-on practical education, this year’s now highly skilled graduates have found work in editing, camera and production in some of the country’s top television production companies.

“The course gave me a really great practical introduction into TV as we were based in a busy live production environment.”  Sarah McCoy, NemetonTV

“I strongly believe that the Higher Diploma in TV was a key factor in my obtaining places on two sought after trainee programmes.”   Allister Higgens, Screen Scene and Oireachtas TV

“It was great to have the experience and advice of lecturers who are all industry professionals with broadcasting credits” Fiona Griffin, Sibeal Teo and Fleadh TV

“Because I had so much practice in camera and editing on the course, I was able to walk straight into a job and start using these skills.” Cian O Halloran, NemetonTV

This Higher Diploma in Television & Digital Media Production is run by the Waterford Institute of Technology in association with NemetonTV, one of Ireland's leading production companies, and Údarás na Gaeltachta. The course has gained a high profile in the media industry and has an excellent employment record among course graduates. Films produced on the course have gone on to win Best Irish Language documentary at the National Student Media Awards every year since 2014. 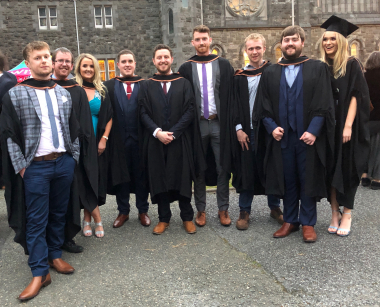