Dr. Jennifer Kavanagh : Are There Limits to Absolute Privilege

Full story can be found here

"The issue of parliamentary speech and protecting both the speech rights of members of the Oireachtas and the media are important aspects of civil and political rights. The ability of members of the Oireachtas to raise matters of public importance without the ‘chilling effect’ of defamation law is a common feature of western democracies based on a common law tradition.

However, the ability for parliamentary speech which is covered by absolute privilege to permeate the media without restriction and for the media to act in their role as the ‘educators or public opinion’ was questioned. This issue has been highlighted by the recent restriction placed on the reporting of the statements of Catherine Murphy to the Dáil by RTÉ. Even though Mr Justice Donald Binchy has clarified and released a redacted version of the High Court judgment, the impact on political speech of Oireachtas members remains.

The Role of Oireachtas Members and the Need for Absolute Privilege

The members of the Oireachtas are there to theoretically hold the Government to account. One fundamental part of their role is to air issues of public importance. For this reason it is essential that their speech is not subject to the review of the courts. The protection is known as absolute privilege and means that the statement of members of the Oireachtas in the chambers of either the Dail or the Seanad cannot be considered by a court.

This principle is enshrined in the Constitution. Members of both Houses of the Oireachtas are protected by the Constitution from Court actions in relation to what they say in the House. This type of protection is widely found in democratic states and is considered an important foundation stone for an effective parliament. The Irish version draws heavily from provisions in Westminster. The original version of the protection was incorporated in the Bill of Rights which placed utterances by members of parliament outside of the scope of the courts. Under Article 9 ‘…freedom of speech and debates or proceedings in Parliament ought not to be impeached or questioned in any court or place out of Parliament’ Under the provisions of Article 15.13 a TD “shall not, in respect of any utterance in [the Dáil], be amenable to any court”. However a member can be asked to account for what they have said to the House itself.

The provisions of Article 15.13 are reflected in the Defamation Act 2009 which includes what is known as ‘absolute privilege’ in section 17 which states that any statement made in either House is protected. The principle which underpins parliamentary privilege is that members of either house of parliament should be able to raise issues in the public interest without fear of court action.

The rules for debate in the Oireachtas are set by means of Standing Orders and is provided for under Article 15.10 and set out a procedure for the amendment of the Dáil record to reflect a complainant’s side of the story when an abuse of privilege has been found. This procedure under the provisions of Standing Order 59 have proved useful for those that are aware of the process in the past.

The Limits of Absolute Privilege

However there is an issue with the protection reporting such speech in the construction of section 17. If the parallel restriction for speech in court and the reporting of such speech is considered and then contrasted to the protections for parliamentary speech it is clear that there is actually no absolute privilege for reporting the Dáil. This is even more striking when the previous legislation is consulted. Second Schedule, Section 24 of the Defamation Act 1961, provided expressly for the protection of speech when reported from the Dáil.

A fair and accurate report of any proceedings in public of a house of any legislature (including subordinate or federal legislatures) of any foreign sovereign State or any body which is part of such legislature or any body duly appointed by or under the legislature or executive of such State to hold a public inquiry on a matter of public importance.

The position of parliamentary speech has now been re-established with the restatement of the order from the High Court judge. However the inconsistency between the drafting of both the provisions leaves the position of the media in doubt. The previous situation where media organisations could not report on the proceedings of the Dáil even though the same statements were freely available on the Oireachtas website and transmissions, showed how the position of the media as ‘organs of public opinion’ were unable to act in their constitutionally mandated role as ‘educators of public opinion’ were unable to tell citizens what transpired in their national parliament. Until the gap between both the 1961 and 2009 Defamation Acts are addressed the possibility of action against the media for statements made in the Dáil will continue." 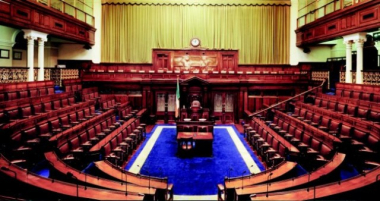