A start-up gaming company founded just a year ago by trio including two WIT computing graduates has caught the attention of Dragons’ Den Gavin Duffy.

The entrepreneur and communications consultant offered €60,000 investment for a 22.5% stake in the 12-month old company, Treybro.

The company was founded by Waterford twins Daniel and Michael Treyvaud and Tipperary native Patrick O’ Callaghan in April 2015. The avid gaming enthusiasts turned mobile application developers created TreyBro as a way to connect gamers across the globe.

The three worked in Cyber Forensics at PwC in Dublin.  Whilst there they learned how to solve problems with creative solutions.  Combining their love of gaming and a wealth of IT knowledge, TreyBro was born; a free mobile application designed to discover and connect gamers based on what they are playing and match their skill level across all the top gaming platforms, such as PC, Xbox Live, Sony PSN and Steam.

Co-founder Michael Treyvaud explains that there are approximately 1.8 billion gamers in the world with a spend of $91.5 billion directly linked to the gaming industry in 2015. “TreyBro is to gaming as Tinder is to dating.  Effectively, we are gaming match-makers.  TreyBro matches players with gamers who have a similar skill level, but maybe different strengths.”

“An analogy we like to use is, imagine eleven goalkeepers turn up to play for the same team, the game is unbalanced and bereft of a whole myriad of skillsets – the chances of winning the league are slim!  However, TreyBro will source the players that complement a gamer’s particular skill set.”

​Michael Treyvaud holds an honours degree in Applied Computing from WIT. He has a background in security testing of applications for large organisations such as ICON Clinical, Mitsubishi UFJ, AIB and Renaissance Reinsurance. He was a professional gamer in his early 20s and funded his education based on his gaming skills. Before going full-time in TreyBro, he was a consultant in PwC Dublin. Michael brings a range of skills to TreyBro including technical architecture, software engineering and information security. Michael recently won the IBYE for the South East for TreyBro.

Daniel Treyvaud holds a 1st class honours in Computer Forensics and Security from WIT. He won the SunLife Enterprise and Innovation Award for the excellence achieved in his final year project. Daniel is currently part-time in TreyBro however he has dedicated his evening and weekends engaging with the professional gaming community. Daniel is TreyBro’s channel and marketing lead and has built its go-to-market strategy with Team2G, a professional gaming community with over 17 million unique views per month. He was previously a Consultant at PwC and has been a gamer for over 20 years.

At just 12 months old, TreyBro, which operates from the South East BIC incubation centre, has received many awards and plaudits.  In October, 2015, co-founder Michael Treyvaud scooped the Best Start Up Award in Ireland’s Best Young Entrepreneur (IBYE) Waterford final with a prize fund of €20,000. Also, as part of Enterprise Ireland’s New Frontiers program, TreyBro was awarded $10,000 worth of Amazon Web Services to support the site’s hosting.  The company has availed of the FbStart programme, which provided a package of free services including hosting and advertising support.

Richie Walsh, Head of Enterprise at Waterford Local Enterprise Office commented on the start-up’s growth.  “It’s great to see such enthusiasm by these three young men in focusing the spotlight on Ireland as an innovative hub for technical excellence. Having already received global exposure at last year’s RISE Conference and GamesCom in Germany, undoubtedly the future of gaming technology is assured.  With plans to expand and create employment in the area, TreyBro is the embodiment of the entrepreneurial spirt that is flourishing in the South East and one that Waterford Local Enterprise Office is proud to support.” 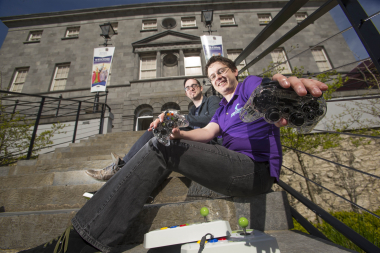 Daniel Treyvaud and Patrick O’Callaghan – two of the founders of TreyBro - a free mobile application designed to discover and connect gamers across the globe.