EDC Schools Engineering Challenge took place in WIT on 11th April for Engineering Week 2018. The challenge is designed to give secondary school students a taste of what is involved in being an engineer.

For this years challenge, teams were asked to propose and design a pod-like structure to form part of the proposed North Quays Development in Waterford City. Teams had three hours to research and prepare their proposal, before presenting to the judging panel after lunch. The teams came up with five excellent proposals and the judges were very complementary of the presentations and the professionalism of each of the students.

This competition is a new and exciting venture and all the students involved said it was a unique learning experience for them and they really benefited from the collaboration between WIT students and transition year students. It was great to see a good mix of male and female students for this Engineering Challenge.

Colm Tynan, Andrea Bourke & David Williams, lecturers in the School of Engineering in WIT, who organised the event, would like to thank EDC Engineering for their kind sponsorship of the event and the schools for sending along their students to compete.

This event was originally scheduled to be run during the week of Engineering Week 2018 in February but was rescheduled due to the adverse snowy weather. 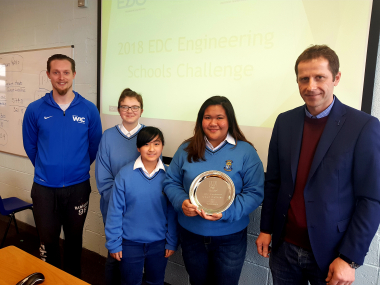