Phil Healy, one of WIT’s stellar elite sports scholarship students, added to her amazing run of form when she broke the Irish women’s 200 metre record this week.

Competing at the Cork City Sports at the CIT track, the 23-year-old beat the record which has stood since Sarah Reilly ran the distance in 23.02 in 2001.

Finishing in third-place to two-time Olympian Crystal Emmanuel of Canada who finished first with a time of 22.76 and the USA’s Joanna Atkins, who holds her nation’s straight-line record over 200m.

Last month the Cork woman set a new Irish record in the 100m with a time of 11.28, while she posted personal best times in the 200m and 400m days later in Geneva. No Irish woman had ever run sub-23, and after the 11.28 she ran for the 100m last month, Healy is now the first Irish woman since 1978 to break national senior records in both events.

While the 400m is Healy's main event focus, she now has the European Athletics Championships standards for the 100m, 200m and 400m which takes place in Berlin next month.

Phil, who is coached by WIT Athletics Development Officer Shane McCormack, is studying for an MSc in Computing. 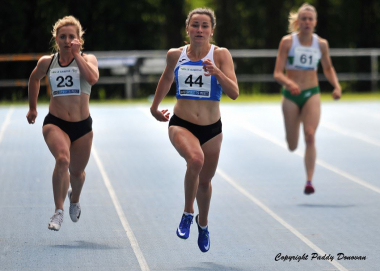