Current BSc (Hons) Applied Electronics student Jenny Ball has been presented with the Intel Women in Technology Award in Leixlip for academic excellence.

Jenny was one of nine women to receive the Women in Technology Award which was based on academic excellence and saw Jenny receive a monetary payment.

“The award was presented to me following my role in the robotic car project, that I worked on with my classmates from the BEng in Electronic Engineering as well as my academic results. I specifically worked on the steering control system.”

The awards ceremony, which was held in Leixlip, Co. Kildare, saw the inaugural presentation of the new Women in Technology Award as well as 16 scholarships.

Those who were presented with the new Women in Technology Award were graduates from a level 6 or 7 degree from an institute of technology from across Ireland.

Having graduated as the only woman from the BEng in Electronic Engineering degree from WIT on Thursday 4 November, Jenny says, “This is an extraordinary achievement, it is a fantastic feeling that out of all the women in technology who do great things, that not only was I nominated, but I was presented this award. To be thought of by such a highly commended company as achieving something brilliant in my area is indescribable.”

Future for women in technology sector

Speaking about the Women in Technology programmes at the presentation event, Intel Public Affairs representative Sarah Sexton said, “Women are under-represented in the technology workplace and this programme creates an important opportunity for us to encourage more young women to pursue careers in science and technology, as well as giving them first-hand experience of the career opportunities at Intel.”

When discussing her reasons for choosing engineering, Jenny said, “I thought this would be an interesting route to take. I’d always been into computers and circuits. The more women we see go into engineering and technology the better.”

Jenny has since secured work placement with Boston Scientific in Clonmel for a six-month period as part of her BSc (Hons) Applied Electronics degree. 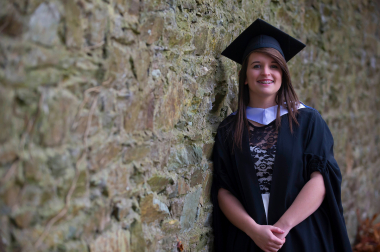 Recipient of the Intel Women in Technology Award, Jenny Ball, at her graduation from the BEng in Electronic Engineering at WIT