A group of third year Business Studies (Hons.) students at WIT have set up a number of small businesses as part of their academic studies.  The students are part of a novel, flexible semester which gives them the opportunity to experience the world of enterprise through the New Venture Initiative module. These Bachelor of Business (Hons.) students have not attended formal lectures this semester but are still given credit for their creativity and initiative by the School of Business at WIT.

Five brave students have taken part in the business start-up module including:
Kierán Quealy from Newrath, Co. Waterford  - who designed a new board game to appeal to war strategists and language enthusiasts. The game has been developed to prototype stage and has received positive feedback from early testing and focus groups.

Fiona Dempsey from Arklow, County Wicklow - set up an online custom and replica car graphics company called ‘Vinyl Styling’. The products are aimed at people aged between 17 and 27 who wish to modify their vehicle in a cheap, convenient and completely reversible way.  Vinyl Styling trades through different channels including: social media, car forums, classified sites, Waterford I.T. and car shows.

Paul Edwards from Wexford and Stephen Walsh from Waterford - set up ‘ievents’. This semester, ievents ran a large social enterprise event for Spinal Injuries Ireland in WIT. The dynamic team intends to keep the business going and manage a selection of events, starting with class mystery tours to nightclubs throughout Ireland next semester.

Wayne Ryan a native of Waterford City - developed a company called ‘iaccessories’, which sells high quality accessories for Apple products and has received orders from the U.S.A, Australia and the U.K.  Whilst the business started out selling 10 foot chargers for iPhone and iPads, he has since added iPhone 4 to 5 converters and other products. Through his Facebook site, Wayne discovered that his accessories are particularly valued by parents of autistic children. He stated“I am delighted the accessories are making peoples’ lives easier, in particular the parents of autistic children who use the chargers on their iPads. They have told me it makes long car journeys easier while the children use the iPad in the back seat!”

With the backing of the School of Business, each new venture initiative is assigned an experienced non-academic enterprise mentor. The South East Business and Innovation Centre (South East BIC) have sponsored the programme since its inception six years ago. “We are delighted to be associated with the New Venture Initiative which is growing from strength to strength each year” said Michael Maddock, CEO of South East BIC. This year’s South East BIC Student Entrepreneur of the Year was Fiona Dempsey. The businesses were diverse and innovative and we look forward to seeing a number of these students choosing entrepreneurship as a career. The students return to formal studies in September to complete their degree. 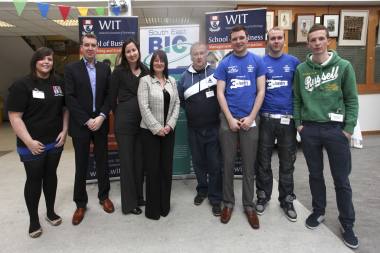