Over 150 people attended the WIT and Nemeton TV Higher Diploma in Film graduate premiere on Thursday, 22nd May in SCG Cinema, Dungarvan.

The students on the postgraduate course in Television have been working very hard under the guidance of their camera, editing and directing tutors over the past few months to research, film and edit four excellent 30 minute dramas, music shows and documentaries and two drama films, many of which were filmed in Waterford and Dungarvan.

The Head of Humanities at the Institute, Dr Richard Hayes, said at the launch that the Higher Diploma course in TV taught between WIT and Nemeton TV in An Rinn,”is a very important college link with the Gaeltacht and with industry". Irial Mac Murchú pointed out that many of the graduates of the course are now working in all aspects of not only the TV industry but also in making digital videos for marketing.

This year’s students shot their films in Derry, Galway, Cork, Connamara, Waterford and An Rinn and included a film about a specially composed suite of music inspired by the Comeraghs by Eadaoin Walsh from Waterford. Local film maker Conor O Donavan came over from London for the premiere of his film called 'Bad Teacher'. The film included transition year students from St Augustine’s College.

One of the films, shown in last year’s graduate show went on to win first prize in the National Student Media Awards for best documentary in the Irish language and an extended one hour film has been commissioned by TG4 of the same programme. Two other films were also selected for broadcast on TG4. This year’s course hope to surpass the success of last year’s graduates with their films.

The Higher Diploma is a very practical course on camera, editing and production scripting skills taught by Irish television industry professionals and WIT. Eight graduates of previous years of the Higher Diploma in Television are working in Nemeton TV. Others have found employment in production companies, such as TG4, Film and Digital Marketing companies.

For further information on the Higher Diploma course or shorter Camera and Editing courses, contact the Training department at traená[email protected], 058 46499 or www.wit.ie/wd551. 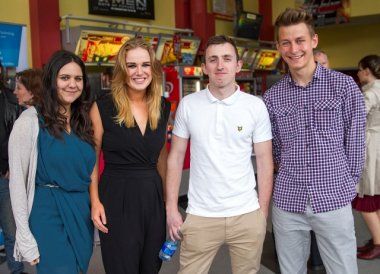