Each year five exceptional undergraduate students are awarded scholarships worth up to €12,000 (€2,000 per year of study and €500 per semester)

The 2017 recipients of the Waterford Institute of Technology (WIT) President’s Scholarship programme were recognised at ceremony recently.

The scholarship scheme, which had its first cohort in 2016, encourages and rewards young people who show a capacity to shape a better society.

Each year five exceptional undergraduate students are awarded scholarships with a total value of up to €12,000. Each President’s Scholar receives an annual bursary of €2,000 per year of study along with €500 per semester.

The President’s Scholarship programme had sought applications from individuals who with attributes such as being creative, innovators, leaders, or people who make significant contributions to community.

The 2017 President’s Scholars are:

Louise McGrath, a past pupil of John The Baptist, Hospital, Co. Limerick a student on the BA (Hons) Culinary Arts degree in WIT’s School of Humanities.

Dominika Kuzniar, a past pupil of Presentation Secondary School, Waterford, a student on the Bachelor of Architecture (Hons).

Lauren English Adams, a past pupil of FCJ, Bunclody, Co Wexford is a student on the BA (Hons) Health Promotion student

Seán Walsh, a past pupil of Mount Sion CBS, Waterford, is a Bachelor of Business Studies (Hons) student.

Addressing the scholarship recipients, WIT President, Prof Willie Donnelly said: "WIT recognises the unique qualities of all its students and is committed to ensure their academic potential is reached. Education goes beyond the CAO points system.  The President’s Scholarship reiterates WIT’s commitment to our students as individual participants and the uniqueness of all students through the promotion of remarkable people who have made a major contribution to their communities. The scholars are ambassadors for their generation and role models for the institute student community and second level students.”

In attendance at the event were Heads of Schools at WIT, course leaders, families, and representatives from the students’ former schools.

President’s Scholars will also be part of the Student Ambassador programme for the duration of their studies, representing the college and the Academic School in which they study. 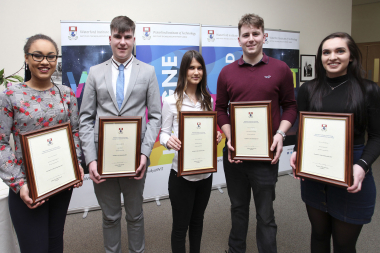 Pictured at the ceremony are the 2017 President's Scholars