From final exams to Mayor for WIT’s Adam Wyse

As a local City and County Councillor, Adam Wyse has been heavily involved in the Waterford community and local politics while studying at WIT

In the space of a few weeks Adam Wyse (22) has gone from completing his final exams on the Bachelor of Business Studies (Hons) course at WIT to becoming Mayor of Waterford City and Council.

Adam started at WIT in September 2012, completing the Higher Cert in Business before transferring onto the BBS (Hons) course.

He also completed an internship at WIT as part of his studies.

Adam has juggled study and politics for two and a half years. Joan McDonald, Head of Department of Management and Organisation commended him on all he has achieved. “On behalf of my colleagues at the School of Business I would like to congratulate Adam on this momentous occasion. We wish him all the best as he makes the move from his undergraduate studies.”

In December 2013, at the age of 19, Adam Wyse was co-opted onto the Waterford City Council – and is the second youngest member to ever sit on the council.

He subsequently took part in the local elections running a successful campaign and in May 2014 was elected to Waterford’s Local Governing Body and was also the Youngest Councillor elected in Ireland.

His board member appointments include Garter Lane Arts Centre, Waterford Regional Airport Authority. He also volunteers and represents multiple charities such as Cancer Awareness, Self Help Africa and has organised Blood Drives on campus at WIT on behalf of the National Blood Transfusion. 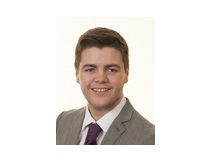