The engineering student’s project opened many doors for him, but he wouldn’t have had the opportunity without the WIT President’s Scholarship

Gareth Dineen is 2020 graduate of BEng (Hons) Mechanical & Manufacturing Engineering and a past pupil of Ardscoil na Mara, Tramore, Co. Waterford. He talks about his engineering final year project and the opportunities it has presented him going forward.

In the final year of Mechanical & Manufacturing Engineering, students are required to create a project that showcases their skills and understanding of the course material. Gareth states that from this time at WIT, he developed an interest in electromechanical devices.

Idea to create an electric skateboard

“During a holiday while trying to figure out how to cross Athens I had the idea to create an electric skateboard. I needed a project idea so this was a perfect fit. I thought about how I would do it. Get a long board, slap a battery and motor on the bottom connected to the wheels with a pully. Then just a speed controller, a trigger for throttle and it would be done.

“But this idea quickly faded because it was just too boring, I’d have it done in no time and I did not feel it was challenging enough for me. Four wheels would be easy, how about one wheel? That would be a more fitting challenge. I didn’t want this to be like a “hoverboard” where it only works on smooth flat ground, I wanted to be able to go off-road. I wanted to be able to ride it like a surfboard, snowboard or skateboard. To go off-road it would need a big wheel to handle the bumps. About the size of a go-kart wheel should work.

Gareth discusses that he didn’t want to just copy Future Motion’s Onewheel. “It was my inspiration but having only seen them in videos, I did not know much about how it worked and I purposefully avoided looking at anything to do with the Onewheel as I wanted mine to be my very own. I didn’t want to fall for the Einstellung effect where any ideas would not truly be my own and just inspired by an already working design. A friend had the idea to call it the Unowheel. This was because the early plans had the board being powered by an Arduino Uno while also being a Spanish play on the word for One.”

The process of it beginning as an idea to a fully finished device took nine months which did include some setbacks from a global pandemic during the fabrication stage. Gareth mentions “this meant I had to redesign parts so they could be made at home on my 3D printer. Fortunately, from my hobby of building racing drones and running the drone racing club, I had all the electronics equipment I needed to finish the project at home. Despite the setbacks I managed to have Version 1.0 ready for my final presentation. This version met my three tiers of goals.”

The Primary was just to have a board that he could stand on that could self-stabilise and nothing more. The Secondary was to be able to travel at a decent speed and for a decent range while having some key safety features. Some of the Tertiary goals included headlights, a built-in charger, USB ports for charging phones and Bluetooth for speed and data tracking.

“Version 1.0 worked but lacked the refinement of a consumer grade product. The wires were squashed into the case, the bumpers were too weak, the pressure pads for foot detection were faulty, the power switch used mosfets which were prone to failing and the inrush of power risked damaging the electronics.

“For these and a few more reasons I decided to rework the board. From the beginning I wanted to use the board as a mode of transport for my own personal use so making it reliable and better was just for me and no longer for getting a better grade in college. When fixing this I made a tiny wiring mistake. This gave the added feature of turning half the electronics into a smoke machine, that only once. I replaced the overcooked components. This also gave me an opportunity to make even more upgrades. “

40km on a single charge – his everyday mode of transport

Just 3 months after Version 1.0, Gareth had Version 1.1 ready and that is what is showcased in the video. He has now been using the board for nearly a year as an everyday mode of transport, being able to travel 40km on just a single charge.

The cost of running it is tiny. Based off the current price of electricity and petrol, the board gets miles per gallon equivalent of ~3500. The components needed to make the board cost about €800 in total. If including the parts that were fried, never used, replaced or leftover the total cost of developing the board was somewhere between €1,500 - €2,000. Given that the only similar device on the market has a price tag of €2,000 Gareth feels that his cost is “rather good”.

“I don’t believe I could have afforded such a project without having received WIT’s President’s CAO scholarship, it completely paid for this whole project,” Gareth revealed. “I truly could not have made this on my own without the help from all my friends and lecturers. Many people told me that such a project would be too hard and too much and recommended for me to do something simpler. A lot of people didn’t believe I could manage to make it but I believed that I could.

“Despite having their doubts everyone was still determined to help me in any way possible just to increase my chances. It took many late nights and many more energy drinks but I did succeed in achieving my goal.”

Now Gareth must wait for travel restrictions to lift so he can travel to California and continue his career in technology in a company like Tesla or Future Motion. 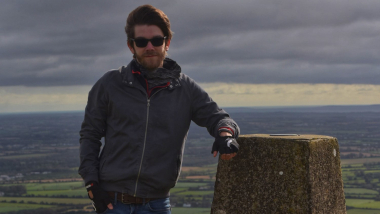